New Jersey has had it’s share of Hulk Hogan moments, but this one will give fans a rare opportunity to be a part of a Q&A with the Hulkster as well as a meet and greet. I would’ve found out about this one too late if it weren’t for my sister shooting me a text about it. So, thanks to the Sexy Armpit’s sister, BROTHER! See what I did there?

For a guy who grew up a little Hulkamaniac, I’m pretty pumped to be a part of this intimate event with one of the greatest and most charismatic professional wrestlers of all time, WWE Hall of Famer, Hulk Hogan.

I checked iPlay America out back in the fall with Dinosaur Dracula and although we only had the chance to play a few games, this place is like an Atlantic City casino, minus the actual gambling and cigarette smoke. There’s video games, rides, food and live events all within such a cool atmosphere. In the few years it’s been open, iPlay has quickly become a destination for concerts, comedy, UFC events, and other celebrity appearances.

General admission tickets for HH Uncut as well as two different tiers of VIP tickets are available now at the following link: http://www.ticketfly.com/purchase/event/617157?utm_medium=bks

www.SexyArmpit.com
[youtube http://www.youtube.com/watch?v=SRr-XIhAAak?rel=0]
Grand Theft Auto in NJ
Gamer is not a word anyone would use to describe me unless they were talking about Words With Friends or Trivial Pursuit. Don’t get me wrong, I was much more of a video gamer in the ’80s and ’90s, when it didn’t take a master’s degree in engineering to advance to merely the 3rd level of a game. Even the open ended games where the player is free to explore his or her surroundings were lost me. In games like Grand Theft Auto, players can shoot at anything they want to, pick things up from the ground, or talk trash to a person passing them on the street. I prefer to have more of an agenda in my game playing.

Although I’ve heard nothing but great feedback from friends about the Grand Theft Auto series, it never enticed me at all. It must be pretty awesome since several sequels have been churned out consistently since it’s debut in 1997. With GTA V slated for September 2013, let’s look back at GTA IV. One of the coolest aspects of the game is that it features an independent state adjacent to Liberty City called Alderney, a.k.a New Jersey which you can read more about at these links:

Congrats to Ralph a.k.a @RS3Feed who was chosen using randomizer.org. He will be receiving the Arkham City Batman and Robin action figures courtesy of The Sexy Armpit! Thanks to everyone who participated! We appreciate all the retweets and emails!
www.SexyArmpit.com

The title of the post says it all. We are giving away a set of DC Direct Arkham City Series 1 Batman and Robin figures. These are sold out all over and quickly becoming collector’s items. You don’t have to jump through hoops to win these either. To enter you have two options. All you need to do is:

2) If you refuse to join Twitter like some people I know, then just e-mail sexyarmpit@comcast.net with the subject line ARKHAM and you will be entered.

Winner will be chosen randomly using a generator and will be contacted for shipping information. Winner will be announced on 1/31/2011. Thanks for swinging by The Sexy Armpit!

Have you checked yourself into an Angry Birds 12 step program yet? If not, you need to come to terms with your addiction! The widespread fixation with Angry Birds has had millions of people’s fingers attached to their touch screen smart phones as they attempt to slingshot birds into innocent swine. I’ve never even played the game, but it seems like everywhere I look at least one person is playing this damn game. According to Wikipedia, Angry Birds has been downloaded over 300 million times so far combined across all platforms. I haven’t seen this kind of fervor for a video game on a phone since Tetris or Bejeweled. Although I haven’t launched any birds from a virtual slingshot myself, I actually have had the pleasure of flinging wrestlers via the WWE Superstar Slingshot game app. That game is the same concept although instead of birds you can catapult John Cena into Randy Orton. If you’re an Angry Birds obsessed New Jerseyan, the schlocky t-shirts I spotted on the Wildwood Boardwalk are especially for you. Do these tees signal the metaphorical angry bird jumping the shark? 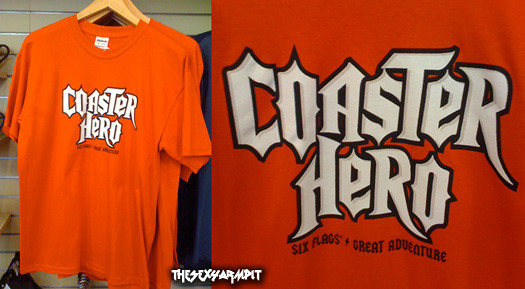 You should only be allowed to wear the Coaster Hero t-shirt from Six Flags Great Adventure if you’ve rode every roller coaster in the park. But what if you can’t make it to Jackson, New Jersey to even attempt that sinuous feat? Well, technologically we’re probably not far away from having a video game chair in our homes that can simulate the same thrilling feeling of a roller coaster. Years ago, games like Sim Coaster and Roller Coaster Tycoon gave us the chance to design our own virtual coasters. Now that we’ve moved well passed Windows 95, who knows where technology will bring us? Rocking out with Guitar Hero for the past several years has been quite a trip so maybe we’ll be able to buy a game that lets us “ride” any coaster in the world in the comfort of our own homes. Or does The Sharper Image have that already?

Come back tomorrow for our thoughts on the new Green Lantern Roller Coaster at Six Flags!
www.SexyArmpit.com

It’s impossible not to sound super old when talking about arcades. Kids nowadays get a big laugh out of the fact that we used to actually go out to an arcade to play video games. Even though most of us eventually had an Atari home system growing up, we still blew our pocket full of quarters in the ominous looking Star Wars Arcade game at the local Space Port in the mall – at least I know I did! The ultra high tech, home based and portable video games of today are no longer the multi-faceted sensory ritual they used to be in the ’80s.

Even though video games have evolved so much from a technical aspect, they are no longer the full blown experience they once were. Sure, new games can immerse us into the creepily realistic world of a first person shooter on X-Box or PS3, with 3-D graphics that will make us question whether we’re in our living room or some chemical plant fighting bad guys, but it’s not the same. Nothing can compare to the feeling I used to get before hopping into the Space Harrier arcade game at RazMaTazz in Sayreville, NJ!

In the arcade, so much care was put into designing the game cabinets that housed the screen, joystick, and buttons. If the artwork on the side panels wasn’t elaborate and eye catching enough, we might’ve passed right by it. You don’t have to slip quarters into your home console or your tiny portable, you don’t even have to go to a store to purchase a game anymore! At this point in time we can beam a game directly to our home console in literally under a minute.

The communal aspect of physically being in the same dark room and hearing the same fusion of sound effects from various games around the room with button tapping and click clacking as the back beat, and even gaining an occasional crowd to root you on has evolved into a primarily home based adventure. This transition is much like the way Netflix and Redbox have made some of us opt to stay home rather than go to the movies.

There’s plenty of gamers much older than me who have moved with the ever changing technology. Personally, I’ve never played a game against someone online and I don’t think I ever will. I don’t want to wear a headset while playing, nor do I care to hear people talking video game trash in my ear. If they were physically beside me in a black lit room, eyes transfixed on the action on the glowing screen, playing a finger numbingly competitive game of WWF WRESTLEFEST, I would welcome the trash talkin’. I think my days of video gaming are tucked away with my memories of my beloved Sega Master System.

via SodaHead and Mike Fireball

More info on Superhero League of Hoboken at Moby Games
If it’s got adventure, New Jersey, and a sexy blonde bimbo who clearly cares more about posing for the camera than she does saving the Tri-State area, then I’m all about it! OK, so the dude on the cover looks like Thor’s mentally challenged younger step brother, but that doesn’t keep me from being utterly intrigued by the 1994 video game Superhero League of Hoboken, which I discovered while perusing the Moby Games website. The game was released in CD-Rom format and on an archaic 3.5 Diskette! Compared to PS3 and XBox games, this one is laughable, but as I found out, that’s exactly how it was intended.

This satirical RPG is set in a “post apocalyptic wasteland,” aka the Tri-State Area. The game features several New Jersey locales in addition to other points of interest in New York and Pennsylvania. The game map depicts The NJ Turnpike, Newark, Edison’s Laboratory, a Radioactive Wasteland, The East Orange Marketplace, Newark Airport, and Atlantic City.

The heroes in Superhero League of Hoboken sound more like The Mystery Men rather than The Super Friends. Check out some of these character descriptions listed at Moby Games: Captain Excitement “his aura of lethargy and dullness can put opponents to sleep instantly,” Iron Tummy “capable of eating spicy foods without any distress,” and Mademoiselle Pepperoni “capable of seeing inside a pizza box without even opening it.” If anyone decides to dress up as this valiant crew at Comic Con or for Halloween, then you have no choice but to forward me some pics. One thing is for sure, NOBODY will have the same costume as you! Your welcome. Leave a comment if you’ve played this game! Is it a Troma Production in the making? Should I get on the horn with Lloyd Kaufman? If Walt Disney can transform Prince of Persia into a movie than why not let Troma have a crack at Superhero Leauge of Hoboken?