Skip to content
It’s highly possible that a fanboy could very well “totally geek out” out at Comic-Con, it’s our form of cardiac arrest except it’s more emotional, ridiculous, and involves more girlish yelps.
This was my first official Comic Con and it was exactly as exhilarating as I expected. John Malkovich, in one of my favorite SNL sketches from this season involving a calculator, had a line that’s become an oft used quote in my repertoire: “I’m going to need freak out control.” After surviving the natural disaster that is NYC traffic, the accident that was holding up the flow for several miles at my Turnpike exit, and the aberration of forgetting my iPod, (no tunes in the car!!!) I finally made it home. I was mentally and physically drained since I spent 6 hours trying to contain my excitement and actually put my “freak out control” into effect. Then there’s the fact that I lose my patience while driving, especially when navigating around Manhattan. FYI – KITT was no help at all. Scumbag. I did a shitload of walking, probably made my way through every aisle 2 – 3 times, and I was forced to eat some fairly awful empanada from a lemonade stand that was fresh out of lemonade. What can ya do? There wasn’t much to choose from at Comic Con in the food department but there were plenty of artists, cosplayers, and a ton of geeky new stuff to check out. Read on!
Lots of Video Game Previews! 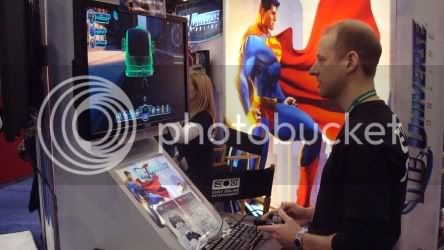 This is Jared Carr, art director for the upcoming DC Universe Online game was much more informative and cooler than the folks at the Ghostbusters video game preview. The specific reason I wanted a PS3 was to get the DCU game and fans have been waiting quite a long time for it. “We’re not discussing dates” Jared told me. WTF man? Give me a break, honestly. Comic Con wants the masses to come and visit all the latest products and kiosks, but if the game isn’t coming out anytime soon then what’s the sense on wasting a whole booth for it? If the makers of the game are trying to avoid setting a date only to have to push it back 3 times, that’s understandable. The burning question people want an answer to is WHEN will it come out!?!
I spent a good 20 minutes talking to Jared and despite him seeming rather irritated that I asked the release date, he was extremely easy to interact with and provided a lot of great insight into what the game is going to be like. You’ll be playing as a character YOU create and the customization is basically without limits. The landscapes and graphics in the game are beautiful and flawless. The PS3 version for instance has no noticeable difference visually to the common person even though the creators of the game naturally had more leeway in terms of power when working on the PC version. Jared told me that every map, area, street, city, and point of interest has been researched with the DC comics team which means the player will be officially emerged into the DC Universe when playing.
The new Ghostbusters game looks awesome although they didn’t have as many of the actual makers of the game at their booth. At least when I was there they had hired hands who kept asking people only to take still shot photos and NO video. The DCU game people were OK with video AND still shots. Regardless, I’m buying both of the games for sure. You can find plenty of video and screen caps from the new Ghostbusters game all over the Internets. They actually DO have a release date (6-16-09) and the Ghostbusters Blu-ray comes out the same day!

Legends of Wrestlemania is gearing up to serve as nostalgia to the old school WWF fans and also bring wrestling video games back to the basics. For years, wrestling video games have grown to feature complicated game play, intricate combinations, and other nonsense that the casual gamer doesn’t want to deal with. The best wrestling games were from back in the day. Games like Super Wrestlemania and Royal Rumble on Genesis and Super NES were so much fun that I’d be hanging out at a friends house playing them for hours on end. Legends of Wrestlemania is authentic since it features all the major classic WWF stars and their entrance themes. The venues to choose from have been those that have hosted Wrestlemania. The fueds and options are all based around classic Wrestlemania matchups. It’s literally a WWF/WWE fans dream come true. The American Dream Dusty Rhodes was there to sign autographs and promote the game which will be release on 3-24-09:

THE ARTISTS
There were many artists who had other business to tend to throughout the day. Some of the artists were doing signings or interviews and had someone else sitting in for them at points throughout the day to sell their artwork. Unless you’ve sought out pictures of the actual artists you’re a fan of, or have met them before, you may not know what they look like. At several of the artists’ tables I passed, I couldn’t be sure if it was really them or not so I always made it a point to look at their professional badges around their neck.

Even though I read his name on his tag “Dean Yeagle,” I verified “Is it really you!?!” I was so excited to meet this guy since he’s a legend in my book. I was first introduced to his art when I first saw his Mandy character getting into mischief in the pages of Playboy magazine. His art is playful and amusing, with a dash of big-eyed Disney wonder. He signed a hardcover copy of Mandy’s Shorts that I bought. Check out his company at www.cagedbeagle.com

Within the past year or so I really got into the pinup art of Amano Jyaku. Since I’ve never attended an official Comic-Con before, (been to a slew of conventions) I didn’t realize that I’d be running into artists and other folks who I knew solely through cyberspace. Creators and other people that I’ve become a fan of online seem to be imaginary until I actually meet them. As I strolled up and down the “Artists Alley,” I quickly glanced at a portfolio book and was immediately familiar with the pin-up style girls staring at me from inside the plastic sheets. It was Amano Jyaku, an artist I became friends with through seeing his art on various websites and on Myspace. I spoke with him and Paigey Pumphrey about how the Internet has opened so many doors for artists who, without the ‘net, might be struggling or forced to confine their skill to simply a hobby. I purchased 2 prints that he signed for me:

Amano’s guitar hero hottie (check out his logo on the guitar!)

Amano’s a big fan of spiced rum,
hence his love for sexy pirate chicks! I love that blue streak in her hair!
amanojyaku.deviantart.com
The magic of comic con or any convention of this type is not only the chance to meet the artists and industry people that you are familiar with or look up to, but also hopefully discover an artist or a book you haven’t heard of. Thanks to the Con, I became aware of Jamie Fay for and his awesome art for the first time. I fell totally in love with one of his Emma Frost pieces and I refused to leave without a signed print:

Another artist who I was pleased to discover was Richard P. Clark. His diverse portfolio is dramatic and mesmerizing. Clark is a truly versatile artist since he creates everthing from caricatures, and comic book characters to still life paintings. Richard was the type of guy who made me feel like I was already friends with him. He was sociable, funny, and appreciative. Clark was curious about The Sexy Armpit.com and it got a few laughs out of him. He signed an awesome Director Bones DC Comics foil card that he illustrated. www.zippystudio.com

Almost everyone I ran into snickered when they read my badge, that in a plain black font labeled me as “The Sexy Armpit.com.” It’s become somewhat of a nickname and I always get a few chuckles or comments, which I invite or I wouldn’t have kept this name otherwise! Thanks to all those who handed me stuff for review and answered my questions. New York Comic Con isn’t as revered as the San Diego Con, but I was still thrilled by the experience and I recommend getting your ass to one of them if you can. Check back soon for Part 2 of my trip the NY Comic Con!
www.SexyArmpit.com