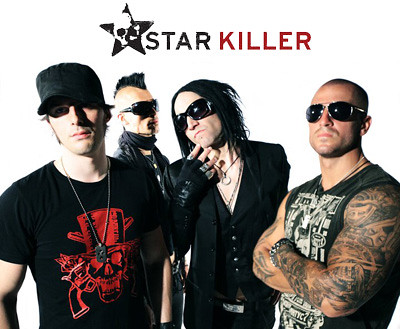 All of a sudden I had an ominous feeling overcome me while listening to Star Killer‘s debut EP. Much like in the TV series V or the film Independence Day, there’s a foreboding sense that these New York rockers are warning us that their approach is imminent. Of course there’s not actually a UFO looming over my town, but listening to Star Killer’s music feels just as monumental.

Packing a futuristic tone in freight, Star Killer’s sound soars into the outer rim. Star Killer’s approach to rock and metal creatively infuses aspects of Nine Inch Nails, Marilyn Manson, Korn, P.O.D, and industrial bands like KMFDM. Allow me to go more in-depth with each song, meanwhile, download your very own EP for your iPod here for free.

“As The Sky is Falling” is the powerful, mind probing opener. The song rises with a blaring scream followed by driving guitars mixed with ethereal sounds. The beautifully layered vocals and background vocals recall Depeche Mode. There’s a cinematic quality to Star Killers’ tracks and it’s no coincedence that lead singer and Edison NJ-born, Jasin Cadic, also co-wrote the screenplay to the film The Perfect Age of Rock n Roll. So, if Mad Max 4 is looking for a soundtrack, Star Killer is the band for the job.

Similarly, the chugging bass and guitars evoke revenge and desperation on “Out of Range.” The track features a mesmerizing chorus that is like an amped up, modern day “Another Brick in the Wall” by Pink Floyd. My favorite track, “Too Wrong,” is soaked in an up tempo alien plasma surrounded by industrial sounds, grinding guitars, earth shattering drums, and a danceable beat. The guitars are like a runaway locomotive in the tanked up mosher “Picture Perfect.” With it’s tremendous bassline and Cadic’s venomous vocals, this track is highly combustible.

For the last track I found myself marching around my room to the intro of “The Hunt.” If you weren’t planning on trying to kill a T-1000, you will be after you hear this song. It’s pulsating beat will have you running toward the nearest inter dimensional portal. Stick around for the whispering conclusion, it’s really creepy.

The explosive element of the songs on the Star Killer EP might very well be the product of caffeine. We had the chance to speak with Cadic and he stressed to us the importance of coffee in the studio while recording: “…some nights the coffee intake was definitely on the unhealthy side,” he joked.

We also asked Cadic what he was listening to on his iPod during their time in the studio and he was more than happy to oblige. If you’re curious to know how Star Killer managed to slide in some infectious beats in the songs, they may have been under the influence of Kanye’s 808’s and Heartbreak. Cadic balanced it out by citing Black Light Burns’ Cruel Melody, and one of his favorites of all time, Killing Joke’s 2003 self titled album with Dave Grohl on drums.

Star Killer is very much a collaborative effort between it’s 4 members, all of whom are close friends and have previously worked together. They recorded this adamantium assembly of tracks at their own studio as well as Jupiter 4 Studios in Rockaway, New York. All songs were written, produced, and mixed by Star Killer, with engineer Steve Schalk. Much like how KISS created the band they dreamed of seeing, Cadic is proud of Star Killer and considers them the band he would “…be at every show for and buy every album they release.” 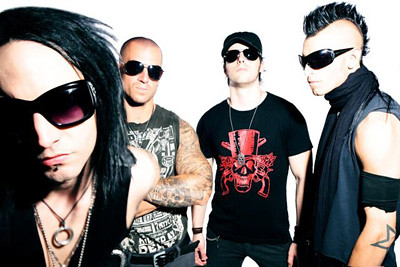