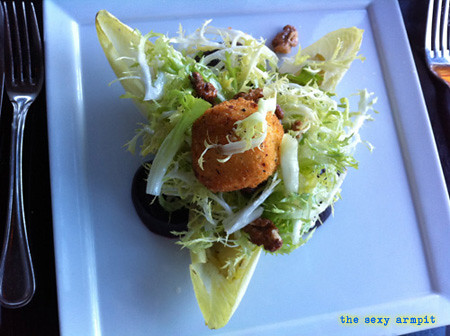 As a belated birthday trip Miss Sexy Armpit and I stayed at the ultra swank W Hotel in Hoboken and also ate at a couple of excellent restaurants. Dinner at the 3Forty Grill was fantastic and breakfast (brunch as they refer to it) at Bin 14. 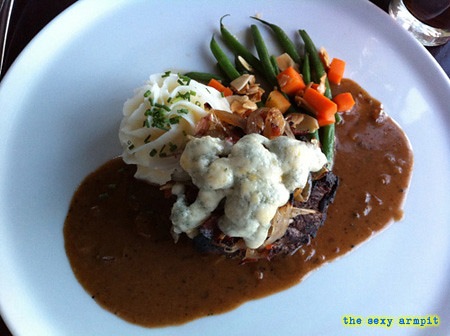 3Forty Grill’s menu is packed with creative dishes. We decided to go crazy and share a salad and an appetizer before our entree. We chose the slow roasted beet and crispy warm goat cheese salad which, thanks to their online menu, featured “frisee, candied walnuts, caramelized apples, and sherry viniagrette.” For the appetizer we went with the ridiculously tasty creamy truffle mac n’ cheese fritters which also contained “black forest ham, sriracha aioli.” I’m not really a steak guy but I had a good feeling about the Char Grilled 10 oz. Filet Mignon which is described on their menu as follows: “topped with applewood smoked bacon, blue cheese and glazed shallots, sour cream and chive whipped potatoes, almond french beans, steak sauce butter.” Everything was outstanding. As you can see in the picture, their presentation is equally as good as their food.

If you feel like splurging a little, give the 3Forty Grill a shot. I suggest waiting until it gets dark because the lighting inside the dining area combined with the waterfront view of Manhattan creates a modern, romantic ambiance.

Trying to get into one of Hoboken’s notable pancake houses, Stacks, on a Sunday morning was a gigantic pain in the ass. The line was almost out the door. I’m not one to wait on long lines, especially considering that I don’t even really like pancakes all that much. I just wanted some damn breakfast! Then we discovered there was an hour wait at The Turning Point, so we walked over to Washington Street and waltzed into Bin 14 after seeing their “brunch” sign. To me, brunch is such an absurd word. Do they really think I’m going to tell my readers that I had “brunch?”

Bin 14 is primarily known as a wine bar, but it also has a delicious brunch breakfast. We ordered eggs any style with bacon and potatoes and it was freaking awesome. Something was different about this order of bacon and eggs. You can get that stuff anywhere, but this was not like getting it from a diner. This was one of the best breakfasts I’ve ever had. The best part was, I didn’t feel 40 pounds heavier after eating it either, much like I do when I leave a diner or Perkins. 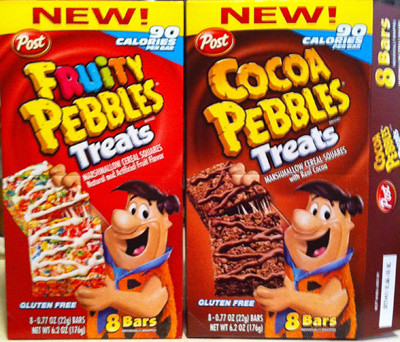 Next up is my latest snackquisition. Yes I just coined that word! Use it and mention The Sexy Armpit! What kind of a wild goose chase would it be if these babies weren’t the end result? Ever since I saw the commercial for these Fruity Pebbles Treats I’ve wanted them so bad. Finally, after infiltrating every grocery store in New Jersey, I was able to get my hands on both the original and Cocoa versions, and they were so worth it. Think Rice Krispie treats only substitute Fruity and Cocoa Pebbles.
www.SexyArmpit.com