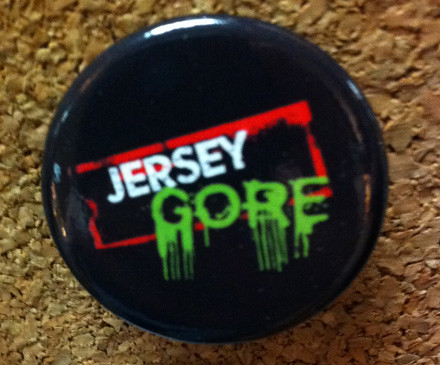 MTV’s Jersey Shore is about to jump the shark. The fourth season premieres tonight and it was all filmed in Italy. Oh, and Deena is now an official cast member which just means she’ll be stripping for any guy in Italy who pays attention to her. So, after spotting this JERSEY GORE pin at the last Monster Mania in Cherry Hill, I had an idea. This pin, which was for sale at the Bad Zombie/NJ Zombie Walk table, made me think of how much better the show would be if the cast all got turned into zombies.
The cast’s lame fights and corny, sappy romances would be elevated to a much more entertaining level if they were all part of the undead. I for one am frigging sick to death of all of Ronnie’s crying and whining about Sammie. F*ck that. If they were zombies I don’t think they’d really give a shit and I don’t think they’d do very much talking either so it’s a win-win. I’d love to see them all show up at a club down the shore with their jaws hanging open, eyeballs all white and glazed over, and their once artificially tanned bodies have decomposed into pale rotting flesh. No need for G.T.L anymore!
At the very least, I think it would be a great idea for the show to film a Halloween episode at the Asbury Park Zombie Walk since it’s a huge record setting deal. That would beat out an entire season’s worth of episodes from Italy. One question though, can walking corpses still maintain ridiculous abs?
www.SexyArmpit.com