Richard M. Hollingshead, Jr. (a sales manager at his father’s auto parts company according to Wikipedia) opened the first Drive-In move theater under the name Park In-Theaters, Inc on June 6th, 1933 on Crescent Boulevard in Camden, NJ. Usually each car paid under a dollar for admission, vastly less than the astronomical prices for movies today. You can read the history of Hollingshead and his theater via this link at the History Channel’s website.

The mid-’80s saw the decline of the Drive-In movie theater. Hope is not lost though. Within the last few years the dine-in trend is coming back, so maybe we’ll see the resurgence of the Drive-In theater?

At the height of the Drive-In craze, Newark, NJ had one of the largest Drive-Ins in the country, but things started to get out of hand. In 1948 Ed Brown’s Fly-In and Drive-In opened in Asbury Park, NJ. Planes landed at a nearby airfield and were allowed to taxi to the back row which was designated for planes.Sounds like Disney’s Cars world, doesn’t it? This outdoor theater had space for 500 cars and 25 airplanes. The formula must have proven successful since another generic Fly-In/Drive-In opened in Belmar in the ’50s.

Considering that I’m not a huge fan of the revamped Dine-In theater gimmick, chances are, the Drive-In Theater wouldn’t appeal to me much either. Apparently, many people in my family managed and worked at a drive-in theater in New Jersey for several years and during high school and college I worked at the local theater as well, so I have a unique perspective. Ultimately, I’d rather be on my couch relaxing while watching a blu-ray and sipping some iced tea and chowing down on food that a waitress doesn’t have to interrupt the movie to bring over to me.

If you’re feeling nostalgic and you want to take the fam out for a night at the movies, why not bypass the usual 24-plex and pay a visit to The Delsea Drive-In in Vineland, New Jersey!
http://www.delseadrive-in.com/

*You can find some of the information in this post at http://www.driveintheater.com/drivhis1.htm#oddities

OK, so, I admit that I Googled “The Sexy Armpit.” This fun little activity actually yielded a result worth blogging about. I discovered that Film Journal International quoted some of my thoughts on the new AMC Dine-In Theater that opened in Menlo Park Mall in Edison NJ. Thanks to FJI, because this was pretty damn cool. I give credit to writer Andreas Fuchs for having the bravery to cite The Sexy Armpit in a professional film journal! You can read the whole article HERE.

Here’s the background: Last December I was invited to a preview of the new AMC Dine In Theater that was about to open a few days later. Considering that I worked at this theater for several years I thought it would be interesting to see how it evolved. My post “Dine-In Theaters? AMC Newest Movie Theater Concept” received a ton of hits and people I know actually began to ask me questions about the theater as if I was the authority on it! The funny part was, I only stayed to check the place out. I had no interest in actually eating in the movie theater or experiencing it the way they wanted me to in order to review it.

I maintain that it’s split 50/50 between people who love the idea and those who have no interest. I have no problem commeding AMC for trying something new, even though it’s an idea that has been around for decades, but I’d prefer to chow down and watch movies in the comfort of my own home. 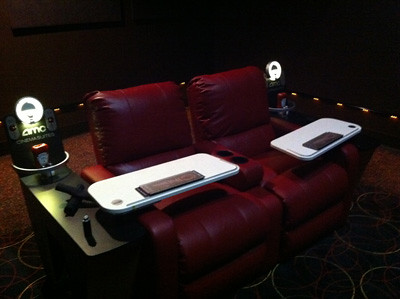 Last week I was asked to attend a special blogger preview night at the newest AMC Dine-In Theater at Menlo Park Mall in Edison, NJ. It sounded like a request for free advertising, but I had my reasoning for showing up there. It was a total trip for me to see this theater after it’s makeover since I actually worked there for nearly 5 years. I had some of the best times of my life there believe it or not, and I met a bunch of people that have become life long friends. What seemed like an easy part time job throughout high school and some of college was truly an awesome experience, so I felt like I needed to check out what they’ve done to my old digs. It was great to see that the structure and layout has stayed primarily the same, but what has changed is the fact that the traditional movie theater will soon be extinct. 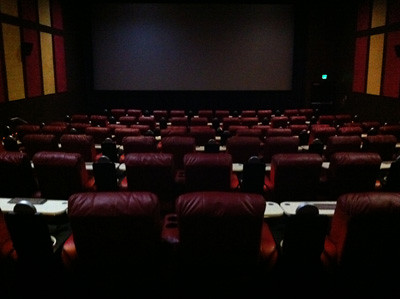 Specially selected AMC Theaters are transforming into a place where you can watch a film, get tanked, and eat dinner all while chilling on a cozy leather recliner. At first I really wasn’t interested since what once was my favorite hobby, going to the local theater to watch a movie, has become an annoyance. Nowadays I’d rather watch movies at home, either selected from my obscene amount of DVD’s and Blu-rays or from Netflix and the nearby Redbox. My worn-in couch and all the little minor luxuries of home make going to the movies a big chore, so this concept is a tough sell for me and I’ll explain why. 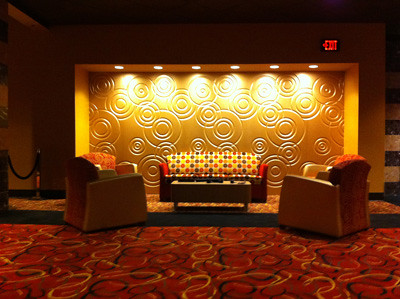 Dinner and a movie used to be one of the simplest dates you could go on. Now, even if you want to take your lady out for dinner and a romcom you wind up waiting 30 minutes at the restaurant for a seat, and then once you get to the movies and sit in the theater some a-hole is talking nonstop behind you and kicking the back of your chair. Combining the experience streamlines the process in terms of time and money. Obviously, no theater gimmick will get rid of the talking a-holes with the leg spasm, they will always be there; but this new Dine-In concept may improve theater going in some respects while making it worse in others.

If I’m going to get really comfy, I don’t want to do it at Menlo Park Mall. Once I get comfortable, I fall asleep. So, inviting me to come into your theater to kick back in an easy chair and conk the f*ck out is not the best plan, especially if you want my tab to get paid by close of business! Terrible idea people! Are they supplying woobies too? 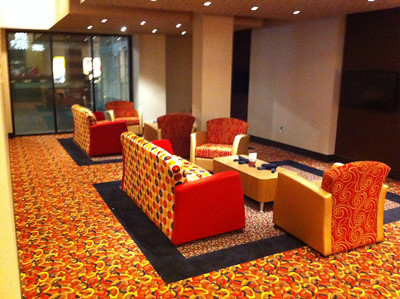 First off, I hate hearing people eat when I’m trying to pay attention to a movie, unless of course, I’m also eating at the same time, then I’m not paying attention to them at all. If the theater is mostly quiet and some couple are chowing down on crunchy nachos beside me, I would want to scratch my eyeballs out. If I was trying to watch a movie and get distracted because someone in front of me is ordering their fifth Mojito and a giant sized portion of lobster ravioli and the server is in my view of the screen I would really freak out in my mind.

I am very particular when I watch things. It’s not so much that I am missing something it’s that old general principle of being quiet in a library. You can wolf down food and domestic beers with your friends at a bar, you can bullshit with your yenta sister in law at your house during the holidays, but I believe in a calm and cool attitude in a theater. It’s a time to relax.

I already mentioned the leather recliners, but there’s also airline style “seat side service buttons” that alert a waiter or waitress that you want to order some grub. That’s a red light for me. Imagine how many people are going to abuse that one. Do they provide puke buckets too? Because when those cougars start getting all up on those raspberry martinis and horning it up over Mark Wahlberg, those poor ushers are going to have some cleaning up to do. 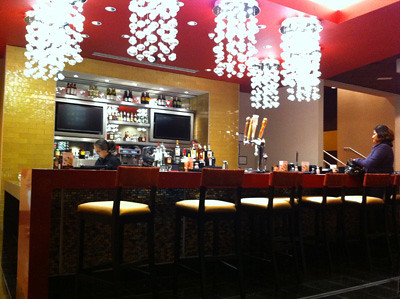 How do you feel about Dine-In Movie Theaters? Can’t wait to go or your ass will be staying on the couch? Let us know in the comments!