There’s not enough Nocturna on the Internet! I’ve expressed my passion for Nocturna and my desire to see her appear in the next Batman film on this site before, even though my efforts will no doubt be futile.

Now that Autumn is here, the sun has started to go down earlier each day. What better way to greet the night than with the sensual and gothic Batman villain and sexpot, Nocturna, Mistress of the Night? While she’s not the comedic sort like Elvira, they definitely evoke similar qualities in appearance. I’d imagine Nocturna is lighter on her feet than Elvira because she doesn’t have big hair. They’re both ultra pale. Elvira just likes to cake on the makeup, but Nocturna has a legitimate lack of skin pigment. I can’t really say if Nocturna ever wears nipple tassels that she spins around when flailing her boobs during dance numbers, but she does carry herself with quite a Dark Shadows type flair.

Noctura’s sexier than Poison Ivy, especially if you don’t like when Pam makes vines grow up your legs and then tries to hold you captive in her room full of killer cactus and Venus flytraps. (Not that she’s tried that kind of kinky thing on me or anything…) Now, goth chicks on the other hand are a lot of fun and unlike Poison Ivy, they don’t need to shoot you with darts full of love serum to turn you on. All it takes is some pale cleavage and jet black hair, and they’ve got you hooked…much like Bruce Wayne was when in the presence of Nocturna!

Today The Sexy Armpit will take a look at the covers and some panels from Detective Comics #530 and Batman #363. Please, all of you creatures of the night, join me in my Nocturna Mission! We’ll have more Nocturna to follow within the Halloween Countdown! 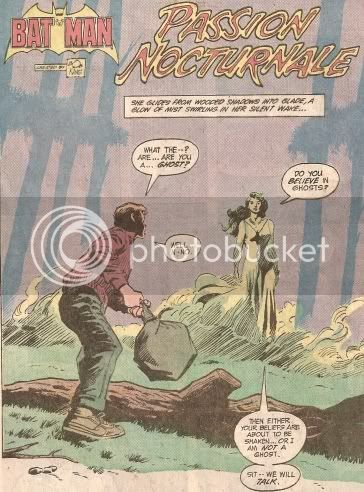