You know when numerous people tell you the same thing but if it doesn’t happen to you directly you can’t feel exactly the same about the subject? That may seem vague, more specifically, I’m referring to the Chiller Theatre convention. If you don’t know what that is, it’s basically a horror/pop culture convention that has been going on annually for over 20 years where personalities from all facets of entertainment sign autographs and take pictures with their fans. There’s also a huge dealer room which is basically like the best flea market with the coolest stuff you will ever go to. If you’re a first timer, you may not notice the clusterf*ck taking place before your eyes. I always hated that term, but it’s the most appropriate word to describe it.

Since I had great memories going to Chiller conventions with my Dad as a kid, I tried my best to ignore all of the negative comments people always have about the con. I always had a really good time and bought awesome crap so I couldn’t see where the breakdown was. If you speak to someone who has been to a Chiller con, chances are, they will trash it. Finally, after going to my first one in the mid ’90s, I now realize why this bad omen exists.

My main directive this year was to meet Elvira, Mistress of the Dark. I’ve been crazy about her since I was a kid, both because she was a hot goth chick, but even more so because she makes me laugh. I consider her one of my comedy idols, after all, the earliest incarnation of Elvira was during her time in the improv troupe, The Groundlings! Elvira has appeared at many Chiller cons throughout the years but for some reason I’ve always missed her. This year I was absolutely NOT going to miss my chance because her appearance was being touted as the last one on the east coast in character as Elvira. 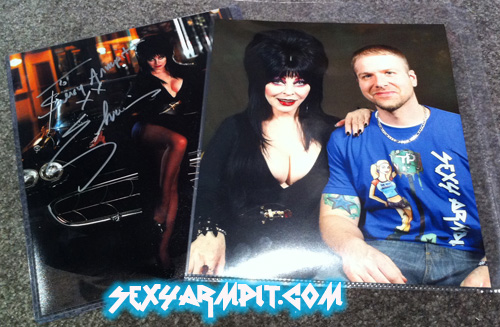 What really pissed me off about this event was that I had to wait on line ALL night for her. First, I was first on line for the autograph signing. She wasn’t planning on showing up until 7, and of course she wasn’t there until almost 7:45. I waited for over 2 hours! Then I was told that photos could only be taken at the designated photo session which would be at 9:45 PM! What a crock! Why couldn’t it be a one stop shop? This meant that I had to dedicate my entire night to Elvira, forget about walking around the dealer room or trying to get any other autographs. Right after I had less than a minute to talk with her I had to go wait on the photo line which didn’t wind up getting let in until nearly 11 PM! Terrible. Awful. As much as I love Elvira, I wasn’t so crazy about the autograph, I was more set on getting a photo op with her.

Once we went in the room we took the pics and then were told we had an hour to wait until they were printed up. We had to come back in an hour! WHAT? A poor woman next to me was complaining she was going to miss her train back to NYC because of this. One other guy had to fight for his money back because he just couldn’t wait any longer. These things are the tip of the iceberg. What’s even worse is that I only found out after purchasing the photo op that they were also offering a jpeg of the pic for a little extra money. I asked if I could add that on and no one had a clue how to make that happen. I offered to supply my e-mail address. I still have not received the picture.

Chiller volunteers and employees had no idea which way was up. They were not communicating properly. Not one of the people in the orange shirts had any valuable information or directions for us. I wound up just taking it upon myself to start my own lines. There were no signs either.  It was really a complete mess and now I understand why everyone is so down on Chiller. Stuff like this shouldn’t happen, and if it does, then it shouldn’t be done near the customers. A typical Chiller attendant pays $20 bucks to get in and then drops tons of other cash on various stuff inside. It’s not cool to air your dirty laundry and shady disorganized business dealings in front of someone who now has to shell out a wad of cash and wait on numerous lines for something that should’ve been done in one shot for half the money.

There are much worse things I could’ve been doing than dedicating my entire night to the Mistress of the Dark. The problem with Chiller is they do all their business right out in the open. I was hearing haggling sessions between Elvira’s handler and the Chiller organizer about money issues and who gets what cut of the take. Then they were also arguing about who would sell the tickets for the photo op and if the photo op would even happen! Elvira’s handler even told me that the Chiller people promised to send a car for Elvira at the airport and one never showed up so that not only made them late, but also angry. I would be pissed off too. Hey Chiller – if you want us to come back, get your shit together!

A BIG thank you to Jamdin at Moongem Comics for keeping me entertained this Halloween season with his killer Elvira posts all throughout the month! For me Elvira always =’s good times.

I’m a yearly Six Flags season pass holder and this season I made it to Great Adventure only a handful of times. Every time I go it seems like there’s over an hour wait on all of my favorite rides! What the hell is that crap? There’s only one way around that and I refuse to give them MORE money to buy a Flash Pass. If they are free at Disney World, they should be free in Jackson, N.J. Despite those disappointments, I still get a season pass and try to make it to Fright Fest even though it doesn’t feel half as fun as it used to. I wonder if it’s just that I’m getting older or if it’s actually getting suckier?

One attraction that I still refer to as the Mach 1 Adventure (cause I’m old school) transforms into the Elvira Superstition ride during Fright Fest. Every time I pass the big Elvira banner I get excited and it’s the one attraction I hope Great Adventure will offer during Fright Fest each year. Elvira is the one true icon of Halloween aside from all the classic movie monsters and killers and the thought of her fills me with the Halloween spirit. Elvira to Halloween is basically what Santa Claus is to Christmas, or better yet…some really hot playboy playmate dressed as one of Santa’s sexy helpers.

Superstition is a fun attraction, although I wish your coaster car wound up rolling into the Haunted House at the end and getting to see the interior more in depth. This You Tube video features Elvira’s ride in its entirety. First you’ll see the pre-show video, and then the ride! Buckle up.

There’s not enough Nocturna on the Internet! I’ve expressed my passion for Nocturna and my desire to see her appear in the next Batman film on this site before, even though my efforts will no doubt be futile.

Now that Autumn is here, the sun has started to go down earlier each day. What better way to greet the night than with the sensual and gothic Batman villain and sexpot, Nocturna, Mistress of the Night? While she’s not the comedic sort like Elvira, they definitely evoke similar qualities in appearance. I’d imagine Nocturna is lighter on her feet than Elvira because she doesn’t have big hair. They’re both ultra pale. Elvira just likes to cake on the makeup, but Nocturna has a legitimate lack of skin pigment. I can’t really say if Nocturna ever wears nipple tassels that she spins around when flailing her boobs during dance numbers, but she does carry herself with quite a Dark Shadows type flair.

Noctura’s sexier than Poison Ivy, especially if you don’t like when Pam makes vines grow up your legs and then tries to hold you captive in her room full of killer cactus and Venus flytraps. (Not that she’s tried that kind of kinky thing on me or anything…) Now, goth chicks on the other hand are a lot of fun and unlike Poison Ivy, they don’t need to shoot you with darts full of love serum to turn you on. All it takes is some pale cleavage and jet black hair, and they’ve got you hooked…much like Bruce Wayne was when in the presence of Nocturna!

Today The Sexy Armpit will take a look at the covers and some panels from Detective Comics #530 and Batman #363. Please, all of you creatures of the night, join me in my Nocturna Mission! We’ll have more Nocturna to follow within the Halloween Countdown!