In many ways, I’ve spent my life prepping for the crap that Dino Drac and I discuss on the Purple Stuff Podcast. Who knew that all those hours as a couch potato on those summer days that were too sweltering to even swim under the sun would actually prove to be useful someday. Well, useful is a stretch, but all those memories certainly fuels our Mr. Fusion of inconsequential nostalgia. For a little trip back in time to when TV sitcoms ruled our world and they were only available through that giant box in your living room, dial up our first TV Theme Songs show from May 2016!

If you don’t need the refresher, well, as Freddy said, WELCOME TO PRIME TIME BITCH! We’ve got 10 TV Themes to discuss and dissect. We don’t only talk about the music, we also get into the details of the actual intros themselves in some cases. No matter what, these are some oddball choices as always. You’ll hear everything from Harry and The Hendersons to Jem! Things are about to get weird so take a listen on your favorite podcast app. Thank you for listening and feel free to add your favorite TV Themes in the comments!

If you dig the show and would like to support the show you can share the show on social media, or recommend The Purple Stuff Podcast to one of your friend IRL! So many people I know are through with social media altogether that you may want to have an actual convo with them and say “Hey, this is a show I enjoy listening to and you may like it as well!” If you aren’t into that option, we would love it if you could give us a 5 star rating on iTunes. And last but not least, you can support us on Patreon for an exclusive monthly bonus show! www.Patreon.com/PurpleStuff Thanks again for listening and reading! 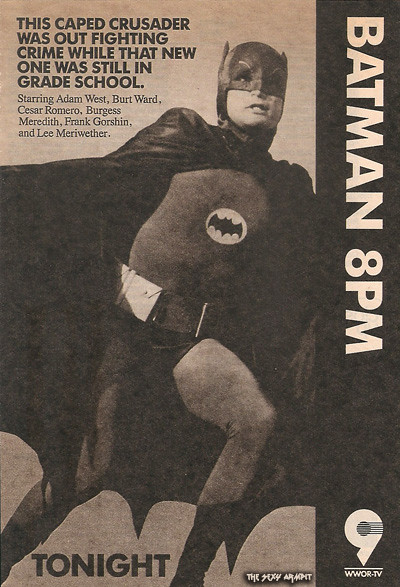 Constantly claiming that things were always better 15-20 years ago is a habit that I never wanted to get into. While it’s not true in some cases, everything always does seem better in hindsight. The music sounded better, movies were more entertaining, and in this case, there was more to watch on TV – even though I only had 6 channels. Nowadays, with a copious amount of programming options, like 800 channels worth, it’s no cliche to say that I still can’t find anything to watch.

When I was a kid I remember the period of time when we did not have cable TV. Although cable was gaining popularity, we held out. At that time, we secretly lusted for channels like HBO, MTV, and Nickelodeon. We eventually convinced my Dad to let us get cable, but I remember being fine with the typical broadcast channels. WPIX 11 was one of my favorites because they always showed cool reruns and great afternoon movies, but I was also loyal to WWOR 9. Channel 9 relocated to Secaucus NJ in the early ’80s and my family and I would pass the building all the time on our way to visit with my Aunt, Uncle, and cousins.

If you aren’t from Jersey then it’s difficult to fully understand how slighted we are media wise. We are a state so jammed with people and yet if you live in the northern and central regions of the eastern part of the state,we have to watch New York stations and those to the south and west watch Philadelphia stations. What the hell is that about? The minute you drive down to southwest Jersey everyone is in love with the Philadelphia Eagles and watches Philly TV news broadcasts. Never made sense to me.

Channel 9 had the same annoying problem that the old Giants Stadium and New Meadowlands Stadium have. People always refer to them as being in New York. Why do we even have MAPS!?! Talk about being a state that gets crapped on. Can’t we just have our own things? New Jersey is the Peter Brady of the United States.

The above ad is just an example of how great channel 9 was. Not only did they offer quality programming but also created amusing ads for the TV Guide! It goes to show how cool the ad was since I kept in for over 20 years now. I used to get so excited when The 1966 Batman movie was on TV. Several years later channel 9 became even more awesome to me when The Howard Stern Show premiered. And people who weren’t aware or didn’t care still thought Secaucus was in New York City.