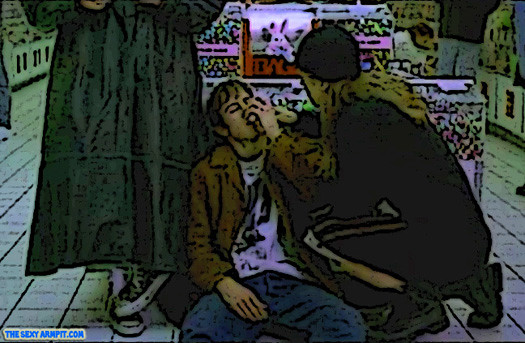 Referred to in the film Mallrats as “The Dirt Mall,” the defunct US1 Flea Market was a notorious local landmark. Why is footage of a plain old indoor Flea Market such a great pop culture moment? Well, if you’re from the central part of New Jersey you’ve probably shopped there many times. Jersey boy Kevin Smith proudly or perhaps not so proudly displayed this
flea market. Now, not only New Jersey nostalgia buffs but all moviegoers can see it. Thankfully, I’ll never forget how this place looked because the US1 Flea Market in New Brunswick, New Jersey will forever be emblazoned on DVD! Thanks Silent Bob, Snootchie Bootchies! (berzerker attack)

When I was a kid in the ’80s (gosh such a long time ago! lol) it was a big treat to come shopping at the US1 Flea Market because I knew I would most likely get some sort of collectible, or “way out there” addition to my collection. It was possible to go in there with the $10 allowance money I had saved up and leave with a bag of random stuff. I remember one time I came home with a Samantha Fox poster, and a 3-D G.I Joe comic book among other cool schwag. Not too bad for a kid about 7 years old. Bless my parents for having such a libidinous, well read boy…well at least in 3-D.

Maybe Smith was making a statement about the shift in consumerism? In contrast to the beautiful sparkling malls that began to emerge in the late ’80s and early ’90s, this old flea market seems almost archaic. Better or worse, indoor malls changed shopping for all of us! No longer was I able to pick up comic books, rock music pins for my jean jacket, and KISS t-shirts all for $10 bucks or less in the same building. Since then, malls in my area have always failed to impress me. Throughout the years it’s been an uphill battle to keep a comic store in business in our local malls. It always seemed like they weren’t able to pay the high rent. Immediately, children’s clothing stores and nail salons would snatch up the empty space. What other way were we supposed to buy vintage collectibles, toys, and posters of Susanna Hoffs? What if my Real Ghostbusters pencil with the Slimer pencil topper broke and I needed a new one? Malls by us didn’t always carry obscure stuff, so without the flea market we had to look out for a garage sale or an ad in a newspaper. That was too much work! Boy am I glad the Internet decided to weasel its way into our lives!

The site of the old US1 Flea Market is now an AMC 18-plex Movie Theater that I’ve gone to frequently since it opened. I actually worked there a few times too since it owned the Menlo Park Mall theater which I worked at for several years. It’s a nice place if you could get past the corpse buried in the parking lot.