Everyone’s bound to experience one of those “uh-oh” moments if an embarrassing song starts playing on your iPod. Picture it, you’re rolling down the main street of your town, windows down, iPod on shuffle mode, and you have your friends in the car. Right after rocking out to “Welcome to the Jungle,” you hear the beginning chords of “Sexy Boy” the Shawn Michaels’ theme song or the Native American war chant that kicks off Tatanka’s theme song. Some of you may not even realize that they’re both WWE theme songs and in that case you may sidestep some shame. Although, you have to admit that at least a little part of you would squirm in your seat a bit.

How about when your iPod segues from Rob Zombie’s “Superbeast” right into “How Will I Know” by Whitney Houston? It’s totally cool to have Whitney on your iPod, especially if its one of her big hits, but when you’re in the car with a bunch of guy friends, and at the very least trying to act cool, your attempts are murdered by the sweet sound of synthesizers. You can win people over with goofy favorites like Wham’s “Wake Me Up Before you Go-Go,” but if their song “Freedom” comes on then your stock descends faster than the Delorean running low on plutonium. (pre-Mr. Fusion of course)

Having your friends ask you to unlock their car doors so they could tumble out while you’re still driving is a possibility if they hear you have the Baywatch theme song on your iPod. Whereas “Break the Ice” by John Farnham from the Rad soundtrack will actually give you street cred with those “in the know.” It’s possible to save yourself when a song comes on that the person doesn’t know but you’ll have to have a good enough story and reason for giving it the push to your almighty iPod. Here’s some examples: You can be forgiven for having Winger’s “Seventeen,” since it’s fun and nostalgic, but once you start digging into their catalog and “Out for the Count” from Karate Kid 3 comes on, then there’s not much that can save you at that point. Don’t let me forget “California” by Phantom Planet. It’s not really the song’s fault as much as it’s what I do when I’m listening to it. I reminisce about scenes from the O.C in a blurry, dramatic, tear-laden montage in my mind. I’ll dig deeper for you as I present a compendium of some of the most embarrassing songs on my iPod:

The Oompa Loopa Song from Willy Wonka & The Chocolate Factory
WWE Songs – The Boogeyman theme “Im the Boogeyman and I’m coming to get you!” and
Land of a Thousand Dances
Play That Funky Music by Vanilla Ice – Shit, how is it that you’re the life of the party if you play “Ninja Rap,” but you may as well crawl into a kitchen cabinet if “Roll ‘em Up” comes on.
Skeet Surfin’ by Nick Rivers/Val Kilmer – Top Secret Soundtrack
Teenage Mutant Ninja Turtles Theme Song – Even though they’re the world’s most fearsome fighting team, you’re friend’s cut you no slack. Just hearing this theme emerge from a segue will always illicit some sort of heckle, so you’re lucky if you’re in the car with a fellow fan boy. That date of yours sure won’t be impressed that you’d rather listen to theme songs of old cartoons rather than Ne-Yo or Rhianna.
Other TV Theme Songs – Muppet Show, Charles in Charge, Mr. Belvedere, Perfect Strangers, Pee wee’s Playhouse Theme by Ellen Shaw (Cyndi Lauper). An interesting fact is that the Saved by the Bell theme song is always an overwhelming cross gender favorite.
King Tut – Steve Martin It’s a very funny song, but trying to hustle it to someone who’s never heard it proves challenging.
I’m Breathless songs inspired by the film Dick Tracy by Madonna Depending on your company in the car this album was obviously more embarrassing than Swept Away and Shangai Surprise combined.
Video Game Theme Songs – The magical songs from Alex Kidd in Miracle World make you come off like a real geek but you can get away with songs from Out Run because they sound like some underground new wave revival band from NYC. You can’t go wrong with the Super Mario brothers theme.
I Wanna Have Some Fun – Samantha Fox
Da Ya Think I’m Sexy? by Rod Stewart – I don’t care, I still love it.
Hot Rod Hearts – Robbie Dupree
Give it To Me Baby – Rick James
Party All the Time by Eddie Murphy and Rick James
Bruce by Rick Springfield here Rick talks about how he gets mistaken for “The Boss.”
Dancing In Heaven (Orbital Be-bop) by Q-Feel, Girls Just Want to Have Fun soundtrack
Sexyback – Poison rips off Justin Timberlake
Get this Party Started by Pink This is on the list just for being too girly.
Glory of Love – Peter Cetera from the Karate Kid part 2 soundtrack
Christmas songs up the wazoo – Merry Christmas Baby by my fav. Pepe the Prawn and R2D2 We Wish You a Merry Christmas! with vocals by Jon Bon Jovi! Girls definitely take heed when they are informed that Jon Bon Jovi appears on the song.
Paula Abdul Songs – Straight up, Cold Hearted Snake. Remember the video for Cold Hearted Snake that was freakin’ hot at the time
Stars are Blind by Paris Hilton
Physical by Olivia Newton John (It fulfills my ’80s aerobic girl fetish)
Step by Step by New Kids on the Block
Call Me Back by Mike Flowers Pops
Notorious by Loverboy
Take It Higher by Larry Greene, Over the Top Soundtrack
Playing with the Boys by Kenny Loggins, Top Gun Soundtrack. Apparently the scene that it plays in is called “homoerotic.” Strange…I didn’t realize a bunch of sweaty, shirtless guys in cut off jean shorts playing volleyball was at all gay.
Ewok Celebration/Finale by John Williams Affectionately known as the “Yub, Yub Song.” You’re pretty much slayed like a Rancor Monster if you get caught with this one playing.
We Don’t Have to Take Our Clothes Off by Jermaine Stewart
Flashdance…what a Feeling by Irene Cara
Howard the Duck performed by Lea Thompson and Holly Robinson Peete
Songs from The Grease 2 Soundtrack – Score Tonight, Who’s that Guy? among others.
Rock and Roll Part 2 by Gary Glitter. A top contender for most embarrassing track on my iPod since Glitter is a convicted pedophile. I hope I’m not denied entry into the plane to Vegas because I have this!
Anything by Franz Ferdinand
Who’s Johnny – El Debarge
Kookie by Ed Byrnes
The Last Dragon by Dwight David, The Last Dragon Soundtrack
Smooth Up in Ya – Bulletboys
Porno Star by Buckcherry Ok this one is literally embarrassing. Imagine if your parents are in the car and the lyrics “don’t you know we fuck for money, I’m a big dick motherfucking porno star” blast through the speakers?
About Us by Brooke Hogan
I’ve Had the Time of My Life by Bill Medley/Jennifer Warnes, Dirty Dancing Soundtrack
Copa Cabana by Barry Manilow
Solid as Rock by Ashford and Simpson
Soldier of Love by Donny Osmond

I want to know…what are some of the most embarrassing tracks on your iPod?

Referred to in the film Mallrats as “The Dirt Mall,” the defunct US1 Flea Market was a notorious local landmark. Why is footage of a plain old indoor Flea Market such a great pop culture moment? Well, if you’re from the central part of New Jersey you’ve probably shopped there many times. Jersey boy Kevin Smith proudly or perhaps not so proudly displayed this
flea market. Now, not only New Jersey nostalgia buffs but all moviegoers can see it. Thankfully, I’ll never forget how this place looked because the US1 Flea Market in New Brunswick, New Jersey will forever be emblazoned on DVD! Thanks Silent Bob, Snootchie Bootchies! (berzerker attack)

When I was a kid in the ’80s (gosh such a long time ago! lol) it was a big treat to come shopping at the US1 Flea Market because I knew I would most likely get some sort of collectible, or “way out there” addition to my collection. It was possible to go in there with the $10 allowance money I had saved up and leave with a bag of random stuff. I remember one time I came home with a Samantha Fox poster, and a 3-D G.I Joe comic book among other cool schwag. Not too bad for a kid about 7 years old. Bless my parents for having such a libidinous, well read boy…well at least in 3-D. 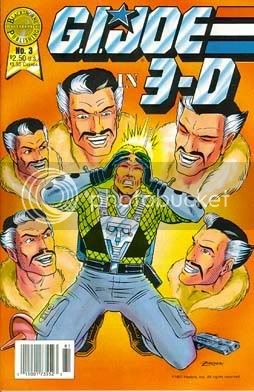 Maybe Smith was making a statement about the shift in consumerism? In contrast to the beautiful sparkling malls that began to emerge in the late ’80s and early ’90s, this old flea market seems almost archaic. Better or worse, indoor malls changed shopping for all of us! No longer was I able to pick up comic books, rock music pins for my jean jacket, and KISS t-shirts all for $10 bucks or less in the same building. Since then, malls in my area have always failed to impress me. Throughout the years it’s been an uphill battle to keep a comic store in business in our local malls. It always seemed like they weren’t able to pay the high rent. Immediately, children’s clothing stores and nail salons would snatch up the empty space. What other way were we supposed to buy vintage collectibles, toys, and posters of Susanna Hoffs? What if my Real Ghostbusters pencil with the Slimer pencil topper broke and I needed a new one? Malls by us didn’t always carry obscure stuff, so without the flea market we had to look out for a garage sale or an ad in a newspaper. That was too much work! Boy am I glad the Internet decided to weasel its way into our lives!

The site of the old US1 Flea Market is now an AMC 18-plex Movie Theater that I’ve gone to frequently since it opened. I actually worked there a few times too since it owned the Menlo Park Mall theater which I worked at for several years. It’s a nice place if you could get past the corpse buried in the parking lot.