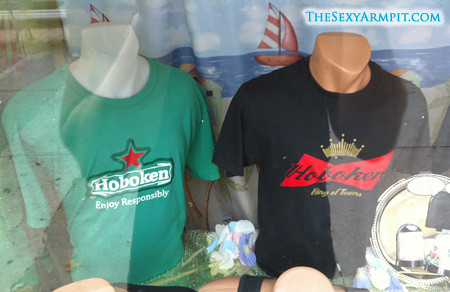 I spotted these tees in a window somewhere on Washington Street in Hoboken. What comes to mind when you think of Hoboken, NJ? I wager it’s either Frank Sinatra, The Cake Boss, or On The Waterfront. If none of those options came to mind, there’s a pretty good chance that something alcohol related popped in your head. A favorite past time of folks from the NY/NJ area is to go to Hoboken and get shitfaced on really expensive drinks, or if you’re the frugal type, you might stick with beer. This post is for those beer lovers, whether they actually hail from Hoboken or they just like to go and get trashed there.

It’s one thing to watch sharks swim around gracefully from afar in a tank, but it’s a totally different story to be almost completely surrounded by them as they fantasize about what’s for lunch. In the name of attracting more people, several aquariums around the country feature walk through shark tunnels. Have we not learned anything from that enthralling cinematic achievement, Jaws 3-D?

As if the 3-D revival craze in the early ’80s wasn’t horrifying enough, JAWS 3-D plainly warned us NEVER to go into any tunnel that looks like THIS:

Click for a Virtual Tour of
Adventure Aquarium’s Shark Realm
It may sound like fun when you’re sitting in front of a movie screen watching Jaws with 3-D glasses on, but when you are actually in the real thing, it’s a very different experience. For those of you who enjoy risking life and limb, The Shark Realm at The Adventure Aquarium in Camden, NJ has a 40 foot, 550,000 gallon shark tunnel that will have you literally handing over your body parts in exchange for the shark’s mercy on your soul.
Something tells me that, eventually, sharks will be the answer to the population problem in the U.S. Anytime one of those ferocious bastards wants to crash through the glass and dine on some dirty Jersey flesh, carnage and utter mayhem could be mere moments away. If you haven’t experienced Dennis Quaid’s tour de force in JAWS 3-D, you better log on to Netflix or order it on Amazon before you head out to your local Aquarium, and because you are missing out on a total shlockfest.

The Adventure Aquarium also has the option to Swim with the Sharks. You won’t catch The Sexy Armpit doing that anytime soon, but the dude from TLC’s CAKE BOSS had the guts:

Are we so starved for entertainment in this country? I could see how we are lacking in good quality entertainment, especially on television, but I know damn well that we’re already filled up on cake and desserts. Of course, I don’t expect the majority of the country to be able to do 1,000 push ups in 23 minutes like Jack LaLane once did, but we really need to restrain the food reality show habit and shows like CAKE BOSS ain’t helpin’ one bit!

Filmed in Hoboken, NJ, TLC’s Cake Boss spotlights Buddy Valastro, the owner of Carlo’s Bake Shop who is obsessive about his work and eccentric enough to make people interested in watching him do it. It’s quite apparent that his crew of gourmet dessert chefs, many of which are his family members, are immensely gifted at what they do, and we get to see their final creations that prove it. My question is, do we really need another show about baking cakes? I thought the Ace of Cakes filled the quota. People love sugary, frosted goodness, yeah I get it. But what bugs me is that network and cable TV pay for shows like this rather than opt to create new original programming that isn’t reality based.

If I wanted to see reality I could hop on the NJ Turnpike a few exits and actually go to Carlo’s bakery, the shop where the show is filmed. I know the rest of the country doesn’t have that luxury, but is there that much of a demand for a show about making exquisite cakes? I’m not taking anything away from their prowess because it’s impressive to watch them create these ornate confections. I just can’t stop thinking that we will never stop seeing shows come along about ice sculptors, rubber band ball makers, food additive geniuses, and popsicle stick house architects. Is this niche type of programming here to stay, or is it a passing trend? I miss sitcoms that were imaginative and silly, I miss creepy shows like Unsolved Mysteries, I miss shlocky action shows, and I especially miss tawdry comedies about 2 girls living with a guy who pretends to be gay in front of his landlord. OK, so Jack Tripper happened to be a chef. That was the closest connection to a cooking show that my shows ever got. Well, unless you want to count the time Alf blew up the kitchen.