Thank you for joining The Sexy Armpit for Shark Month!
Some people have been calling me crazy, while others say I’m just a total geek. Most of the time I can’t figure out what I consider myself. Is spending countless hours of my precious time researching, brainstorming, creating graphics, writing, and editing posts about New Jersey related nostalgia a worthwhile pastime? As if the work week doesn’t deplete my life of free time as it is, I then sink whatever time I have left into trivial bits of New Jersey nonsense. Would it sound completely moronic if I narrowed my blog topic to be even more specific? The answer is YES, and I just spent the last month writing discovering the many relationships that New Jersey has with Sharks. Yes, you really just read that.
While it may not have been as bloody or pulse pounding as the actual upcoming Shark Week on Discovery Channel, for those who enjoy the occasional obscure fact or finding out about a little known film, you probably enjoyed it along with me and I thank you for that. Did Shark Week get monotonous? Hell yes, of course it did. Was a month too long? Definitely. Was Radiation Scarred Reviews right in only doing their own Sharkathalon for 8 days? Absolutely. Now, I know you’re thinking, “But Jay, isn’t the Halloween Countdown a full month long?” Yes sir, but that isn’t nearly the arduous task of uncovering the connections of Jersey and Sharks. Halloween is a much more broad affair, when almost anything spooky, including movies, personal photographs, and memories get shared. So I guess I am a total geek because I can’t wait to get back to my regularly scheduled programming here. And I’m even more excited for The Countdown to Halloween with all of you!
Before I kicked off Shark Month, I had it in the planning stages for several months. I gathered so much material that I’m even thinking of starting and infrequent recurring column on the subject. Would you want to see that? Did you enjoy Shark Month?
www.SexyArmpit.com

The sign for Morgan Fishery and Bistro in South Amboy, NJ. According to user Val Ann on Flickr, this restaurant has taken the name “Morgan” and the shark off of the building.

Before he was well fed, getting a street named after him, and sitting on mountains of moolah, Richie Sambora was as hungry for rock stardom as Jaws was for some silly human flesh. You read it right, Woodbridge, New Jersey’s Richie Sambora or “Sambo” wasn’t always the superstar guitarist of Bon Jovi. Like most rockers destined for greatness, when Richie was through with local sports, he paid his dues playing in several bands. In addition to auditioning for KISS and Poison (who, at the time, was known as Paris), and playing guitar for Joe Cocker, Sambora was part of a band of Jersey guys called Shark Frenzy.

Shark Frenzy’s classic rock sound has been compared to ’70s rock bands like Aerosmith and Meatloaf, but I also hear similarities to several other bands such as Free, and Boston. Their music wasn’t officially released until over 20 years later, when founder of the band and grammy nominee, Bruce Foster, had the previously damaged tapes remastered and put out by Sanctuary Records. There was enough Shark Frenzy material for 2 full albums and the CD’s are available at many online shops (even Walmart!) and possibly the few record stores left. Both volumes are available on iTunes for $9.99 each.

On his official website, Bruce Foster reveals more about how he salvaged the music to finally get it released: “This album features Richie’s first time playing and singing in a recording studio. The master tapes of these priceless recordings were erased by the recording studio. I had the mixes on tape which went under 2 feet of salt water and river silt in the flood. Now, over 20 years later, through months of careful restoration, these recordings equal and in some cases exceed their original sonic spectrum.”

Lori D. from Blackwood, NJ reported that they have a Piranha tank where you could purchase a goldfish for $3.99 and watch it get eaten by the little spiky toothed punk. She went on to say that there are 2 nurse sharks that you can touch, but they are too big for their small tanks. Other reviews claimed that the aquarium looked more like a pet store, their reptiles were sick, and there was a lack of animal supervision on the part of the staff. Next time you take the gang to the boardwalk you may want to say no to your kid who is pulling your arm out of your socket in hopes of going in there. Click here to read the other reviews at Insider Pages and this one from Yelp.

I think Aquarium W. from Manchester Township NJ sums it up real nice for us all: “Holy Balls This Place Sucked.” Cool sign though…

Here’s a tee of the rugby team that was originally called The New Jersey Sharks, but is now known as the Bucks County Sharks. They moved to P.A and they made New Jersey short one rugby team. “What’s one less rugby team?” I always say. But meanwhile, in another part of the Garden State, there was another rugby team also called The Sharks, but these were The Jersey Shore Sharks! These guys were around longer than the other Sharks, and no, they don’t replace the Gatorade with Ron Ron Juice. So, in the end, New Jersey remains successful in filling it’s quota of having at least ONE rugby team named after Sharks!

If you read the history section of The Jersey Shore Sharks website, you’ll see that they are living up to the Jersey reputation. You’ll read more about drinking shots, starting fights, naked bodies, and wet t-shirt contests than you will about their games. That’s the way it should be, because I’m sure getting involved in rugby is all about the after parties and the travel games anyway.
www.SexyArmpit.com 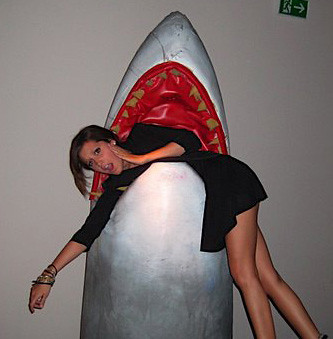 Shark Month wouldn’t be complete without a picture of the FIRST EVER Garden State Playmate and Jersey girl, Ashley Tisdale, being eaten by a shark. In September, look out for Tisdale starring in The CW’s new cheerleading series, Hellcats.
www.SexyArmpit.com

It was bound to happen. Many of you Sexy Armpit readers knew it was inevitable. It’s finally time to give Nutley, New Jersey’s Martha Stewart the nod. And I say, why the hell not? There’s always room for GILFS on the illustrious list of Garden State Playmates.

Martha Stewart may have eclipsed Betty Crocker in popular culture. How often is someone you know cooking, or whipping something creative up in the kitchen and you comment “Wow, you’re a real Martha Stewart!” It’s pretty amazing when you realize she was born in Jersey City, NJ. and graduated Nutley High School.

After a stint modeling and graduating with a double major in history and architectural history, it wasn’t until several years later that Stewart became the crafting, cooking, restoring, and media mogul who we love and/or hate today. Either way, I’m sure you’ll have no problems scarfing down that gourmet meal she makes for you after she shows you several thousand ways of playing hide the sausage.
OK, OK, you got me. Here’s the real reason why Martha Stewart whisked her way into becoming a GSP:

Visit this link to Martha Stewart’s website to learn how she made these cool looking Shark and Beach Cupcakes! A perfect way to celebrate Shark Month!

It’s one thing to watch sharks swim around gracefully from afar in a tank, but it’s a totally different story to be almost completely surrounded by them as they fantasize about what’s for lunch. In the name of attracting more people, several aquariums around the country feature walk through shark tunnels. Have we not learned anything from that enthralling cinematic achievement, Jaws 3-D?

As if the 3-D revival craze in the early ’80s wasn’t horrifying enough, JAWS 3-D plainly warned us NEVER to go into any tunnel that looks like THIS:

Click for a Virtual Tour of
Adventure Aquarium’s Shark Realm
It may sound like fun when you’re sitting in front of a movie screen watching Jaws with 3-D glasses on, but when you are actually in the real thing, it’s a very different experience. For those of you who enjoy risking life and limb, The Shark Realm at The Adventure Aquarium in Camden, NJ has a 40 foot, 550,000 gallon shark tunnel that will have you literally handing over your body parts in exchange for the shark’s mercy on your soul.
Something tells me that, eventually, sharks will be the answer to the population problem in the U.S. Anytime one of those ferocious bastards wants to crash through the glass and dine on some dirty Jersey flesh, carnage and utter mayhem could be mere moments away. If you haven’t experienced Dennis Quaid’s tour de force in JAWS 3-D, you better log on to Netflix or order it on Amazon before you head out to your local Aquarium, and because you are missing out on a total shlockfest.

The Adventure Aquarium also has the option to Swim with the Sharks. You won’t catch The Sexy Armpit doing that anytime soon, but the dude from TLC’s CAKE BOSS had the guts:

Each year, one of the biggest shark fishing tournaments takes place in the waters near Cape May NJ. In the past few years, winners of the tournament took home prize money in the $300,000 dollar range! Enter next year if you dare, but you have to have a boat, oh…and $525 bucks in registration fees. Instead, why not skip all of the nonsense and frustration of fishing for sharks and just wear the t-shirt commemorating the event like the guy in the picture probably did.

I would have never known there was a shark fishing tournament down in Cape May if I didn’t see this dude walking around a store in Menlo Park Mall. I should have known though, since 2010 marked their 30th tournament! The t-shirt has a badass pirate vibe with two sharks replacing crossbones to form a Jolly Roger, as well as the quote at the bottom: “Ya Gotta Earn Your Bones.” Their official website is www.southjerseytournaments.com.

The Shark 103.7 FM T-Shirts available at their web site

Rock stations in the New Jersey area have become scarce in the past few years. A decrease in ad revenue has forced format changes and even complete shut downs of several Jersey stations. Major market stations such as 92.3 K-Rock were not exempt from the shift into the iPod generation either. Thankfully, my former station, Jersey’s Rock Station 105.5 WDHA FM, is still proudly playing rock tunes for The Garden State. If you don’t live in the area, luckily you’ll still be able to hear rock music 130 miles south of the WDHA coverage area if you tune into Atlantic City’s The Shark 103.7 FM. After several years of operating as an adult contemporary station, followed by a ’70s format, 103.7 sunk it’s teeth into classic rock. In 2000, WMGM-FM took on the The Shark moniker and hasn’t changed since. You can listen live, at their official website: www.1037theshark.com.