[youtube http://www.youtube.com/watch?v=PxHkb6jJMp4?rel=0]
I’m happy to present to you our very first Christmas Special. In it, Sludgey wants nothing more than for me to mail his letter to Santa Claus, but I wouldn’t (I had my reasons). Then I made him an offer he couldn’t refuse. I hope you enjoy it. Happy Holidays from The Sexy Armpit!
www.SexyArmpit.com
I invite you to kick back, turn off your brain for a little while, and enjoy The Sexy Armpit Halloween Special 2014. If you enjoy it, it would be awesome if you could give us a thumbs up on YouTube! Thanks for watching and Happy Halloween!
[youtube http://www.youtube.com/watch?v=9wKgx4GMdIw]
www.SexyArmpit.com

Back to the production update:

There was a lot of positivity and momentum going on in the last production update.

This one is more filled with rage and furious anger.
What I intended on being the final day of filming actually turned out to be disastrous, aside from an wondrous trip to Smashburger (had the chicken avocado club in case you were wondering!) It was no fault of the people involved like Mike, his wife Lauren, and Miss Sexy Armpit. It wasn’t my fault either, it was the camera. It seems to gave gone bye-bye. Not disappeared, but more accurately, gone to shit. It’s a realm that I don’t think it will ever return from.
Regardless, after I transferred the footage the computer, I watched it back…stupefied at what I was viewing. Each piece of footage was incredibly pixelated and distorted. If I was making a found footage movie that was recorded on a half broken GoPro camera, this would’ve been tops. I even tried converting the footage, but there was no fixing it since it seems to definitely be an issue within the camera itself.
So, the footage was fucked, and I felt that I was as well. Nothing like a catastrophe like this putting a huge damper on forward progress and what little motivation I had at that moment. I won’t feel fully in the game until we get back on track with the all the footage in the can.
Looking back, it makes this whole thing seem like more of a struggle, and it definitely IS. There’s no embellishing here. Considering there’s no budget, and a fair amount of arguing, the resentment of Jay factor is rising amongst those involved. The only thing I can promise is that when it’s done, the crew and YOU will be moderately entertained. That is what will redeem me here, I hope.
Fingers crossed, tomorrow we’ll complete our re-shoots with a brand new cam. After that it shouldn’t be too long before I can unleash The Halloween Special 2014 to all of you.
As far as running time, we are looking at pushing 25-30 minutes and I previously mentioned in the last post, that is way too long in my view. But there’s too much good stuff that it’s not getting chopped to hell. Let’s face it, we don’t get a limited edition Scream Factory blu-ray so I’m gonna make this one count!
Also, it’d be great if you want to incorporate it into an October horror-thon, like watching it before ohhh, say…Halloween 2 or something, of course that’s just a suggestion, I don’t mean you should actually do that, except no, I DO MEAN EXACTLY THAT. PLEASE.
Cursed footage. Raging tension. Heated arguments. This could be the basis of next years Halloween special. Bah, who am I kidding, I already have 5 ideas for it.
I truly appreciate everyone coming together to help out when this really brought down all of our moods. On a lighter note, I can report that this has been a real team effort. Lots of our online friends have pitched in to help, and even some surprise guests that went out of their way to make appearances both on camera and off. You know who you are, and you will all be thanked heavily in the credits! This aspect of it is really going to make this special the most monumental installment so far. My original vision for these was exactly that – a throwback. I’m all about including guest stars and hijinks much like some low budget TV special you might have seen in the ’70s.
Stay Tuned and thanks for hanging in there! I will not rest until it’s complete!
www.SexyArmpit.com
[youtube http://www.youtube.com/watch?v=P-8Xkog2frs?rel=0]
Call the character hokey or old fashioned all you want, Superman is and always will be the quintessential superhero. The release of the Man of Steel may not come with the same type of fanfare as Batman or The Avengers films, but to DC fans and pretty much anyone who has ever worn a Superman t-shirt, this is a HUGE event.

Personally, I felt Superman Returns got a slightly bad rap. It’s by no means amazing, but I thought Brandon Routh made an excellent Superman and Kevin Spacey was entertaining as Lex Luthor. It worked merely as a very late on the mark sequel to Superman II, but that’s about it. Plus, I haven’t even seen Man of Steel and I already know that Amy Adams will be a much better Lois Lane than Kate Bosworth.

Many of you have already seen the Man of Steel (a.k.a lucky bastards). Lots of cool “biz” folks, journalists, and those who pounced at the chance to get into Wal-Mart’s preview showing have already witnessed Zack Snyder’s modern take on the icon. Reviews have been coming in for a few days and they are largely positive which is great news. I don’t think I’m going to be disappointed, but I don’t know when I’m going to be able to get to the theater to see it. Cue the “awwww” crowd sound effect or the violins – your choice. So to keep myself from getting too antsy in the mean time, I whipped up a video for you.

If you’re getting geared up for the Man of Steel, then I ask you to join me in celebrating this epic event by watching the latest video from The Sexy Armpit. It’s the Sexy Armpit Superman Celebration! I show off some of my early Superman collectibles that I’ve held onto for many years, and naturally, I also run down a few Jersey connections all while being pestered by Sludgey. It’s a fun time! Please check it out and give it a thumbs up if you approve. Thank you! 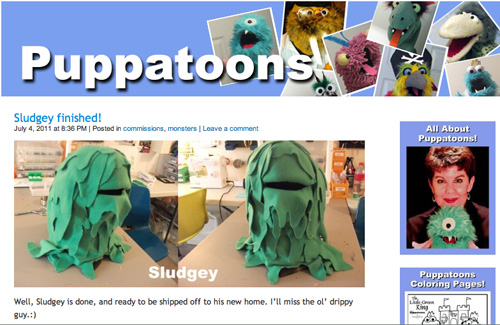 Sludgey was a character I created with my friend Steve to promote not only The Sexy Armpit website, but also the now defunct podcast that was available via the site. It feels like ancient history now since it was back in 2004! I killed off the podcast because it was a lot of work and I preferred to write and create other things for the site instead.

The Sexy Armpit podcast may have disappeared rather quickly, but Sludgey never went away. The little whacked out sarcastic slime monster always managed to weasel his way into my website. Whether he appeared in my header or elsewhere on the site, he was always there. Eventually I used him as my Twitter avatar since the first day I joined several years ago. Many of you recognize him from talking with me on Twitter. So, Sludgey has come a long way and I’m happy that I was finally able to bring him out of the computer screen and into reality.

Thanks to Liz at Puppatoons, The Sexy Armpit is proud to finally unveil our puppet Sludgey! Liz worked with me to create a version of Sludgey that was basically the fleece version of my Twitter avatar. I explained to Liz how I wanted him to look and we went back and forth with sketches and details, and not too long after she sent me some “making of” photos which were awesome. Sludgey came packed securely and, now, a few months later, he’s making his YouTube debut!

You can catch Sludgey in “Get Sludgey to Starland” an episode of The Sexy Armpit Show on YouTube. In it, Sludgey begs and pleads to go to see his favorite band, NJ rockers Scarlet Carson, but the Starland Ballroom won’t allow him in. Check it out! Give it a LIKE!

To see and read more about Liz’s puppet creations go to her blog: http://puppatoons.wordpress.com/

www.SexyArmpit.com
[youtube http://www.youtube.com/watch?v=l1_mysYJMxA?rel=0]
The Sexy Armpit’s first appearance of Sludgey (played by Miss Sexy Armpit) and guest starring the Dirty Jersey Rockers Scarlet Carson. Sludgey was made by Puppatoons. Video was written, directed, and edited by The Sexy Armpit. Please watch it and LIKE it! If you think it’s funny send it to someone who might get a kick out of it. Thanks for your support! P.S: WATCH IN HD!!!
*Get your tickets for Scarlet Carson‘s CD release party on September 24th at Starland Ballroom in Sayreville via this link at Ticketmaster.
www.SexyArmpit.com