Oh shit SHARK WEEK starts next week! To prepare for one of the highlights of the summer, let’s take take a look at a movie based on another scary creature that lives underwater – PIRANHA! The 2010 remake of the film was lightweight, but a surprisingly refreshing horror comedy. And what’s a horror comedy without references to the great state of New Jersey?

Before we get into the Jersey name drop, I’ll tell you about another Jersey connection. The cast of Piranha was like a who’s who. As unpopular as this next sentence is going to sound, I’m a big fan of Jerry O’Connell, and he’s perfect as the obnoxious “Girls Gone Wild” knockoff producer Derrick Jones. And GREAT SCOTT! It’s Adam Scott and Doc Brown himself, Christopher Lloyd. The film also features Richard Dreyfuss in a cameo nod to his role in Jaws. As for hotties, Riley Steele and Kelly Brooke provide some eye candy, and on a milfier note, scoring one of the main roles is Elisabeth Shue who grew up in New Jersey.

In the scene pictured above, Sheriff Julie Forrester (Shue) is on a mission to find out why the local lake is being infested by Piranha. She stops over to see Mr. Goodman (Lloyd), a local fish store owner who knows all about different species, and luckily a lot about Piranha. As she and Novak (Adam Scott) bring a bucket with a Piranha over to an empty tank, Mr. Goodman’s wife deduces what must have happened:

“You know I’ve heard of this happening, it’s like those baby alligators in New Jersey, someone leaves them and then they breed…” – Mrs. Goodman (Devra Korwin)

I didn’t get to see the film in 3-D while it was in theaters, but it was still fun to watch. Piranha is silly, mildly scary, and still pretty awesome, much like the 1970s original. With a running time of 88 minutes you won’t have a chance to get bored. Even though it’s sequel, Piranha 3DD, is schlockier than it’s predecessor, it has David Hasselhoff as himself basically reprising his role as Mitch from Baywatch, but it doesn’t offer Riley Steele and Kelly Brooke swimming naked to the euphoric sounds of Lakme: Flower Duet by Delibes…in 3-D, but both films offer vomiting and castration…in 3-D. 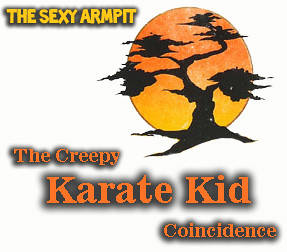 “Yeah, but 3 was awesome because it had the twist that Daniel was getting trained by Terry Silver in the Cobra Kai dojo,” said my friend Frank as he defended 1989’s 3rd installment of The Karate Kid saga. Yes, the actual Karate Kid, with Ralph Macchio, not Will Smith’s son and especially not Hilary Swank. “OK, but 2 had the typhoon which was intense,” boasted Dave who was more passionate about watching Danielsan’s trip to Okinawa than his adventurous attempts at uprooting an innocent bonsai tree. “In 3 I like how they tied in the detail that John Kreese was in the war, it worked nicely.” Meanwhile my mind was regurgitating all the awful, scarring memories of when Elisabeth Shue abandoned me. After all, I was one of her loyal prepubescent admirers and then as if she learned some secret ninja shit, she vanished and was nowhere to be found in the sequels.
As usual, I was the one who incited this debate. So, over a few beers, I decided to gauge some of my best friends’ opinions on the Karate Kid films. I was even nice enough to preface my upcoming topic to my cohorts with a very brief overview of how Empire Strikes Back is largely regarded amongst Star Wars fans and movie goers as the best of the Star Wars films. The same usually goes for The Godfather Part 2 and several other movies as well, it’s just that no one ever paid either of the Karate Kid sequels the respect they deserve by officially burying one of them.
“Since the original Karate Kid is the far superior film in the saga, which of sequels is the best?” I asked them. On this particular night I was in a very “3” mood and was basically in agreement with Frank if it weren’t for the fact that the venerable William Zabka did not appear in it. Other times, such as right after I saw Karate Kid Part 2 in the summer of 1986, (at the now defunct and dilapidated Amboy Multiplex Cinema in Sayreville) I was riding it’s excitement and naturally a huge proponent of The Karate Kid Part 2. But as Batman said in another less lauded film sequel, Batman Returns, “…Things change.”

As we continued to mull over the high and lows of the saga, we examined each film’s minute details which were otherwise ignored, traded barbs, and also inadvertently made jokes to the point where I couldn’t breathe because I was laughing so hard. That’s when something happened that halted The All Valley Giggle Fest 2011.

…DING!
At that very second, a loud bell broke the laughter. It was my iPhone notifying me of a new text message. I leaned over to the coffee table and I was momentarily stunned after I read it’s eerily timed message. I showed my friends, and as we stood there dumbfounded with our mouths hanging open, we all simultaneously turned into “Ted” Theodore Logan and gave a collective “WHOA!” 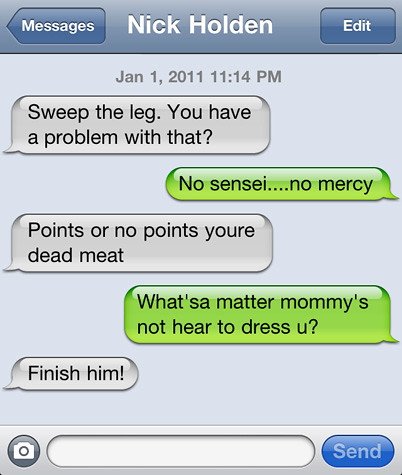 It’s not unlike Sexy Armpit writer Nick “N.J” Holden to text me famous movie quotes at random times, but this one made me feel like he should be Pete Venkman’s next guest on World of The Psychic! I wasn’t sure if it was just a one off movie line or whoever was possessing Nick wanted to continue going back and forth. For a few seconds I felt that if we came back with the wrong line some death machine like in a SAW movie would come out and torture us. Nah, it was just Nick…or was it? Is his cell phone equipped with GPS and ESP? We continued sending back the follow up lines as if we were defending our honor in a karate tournament.
www.SexyArmpit.com
The hustle and bustle of the Christmas season impaired my blog consistency. Between Christmas shopping and work I nearly wanted to vomit when I thought of creating quality posts in the last few weeks. I don’t know how some bloggers can post up to 6 times a day when I feel like it’s a fairly big deal to create just ONE well put together post. Well, here’s another classic copout of a blog post: THE BEST POSTS OF 2008! The following is an exhaustively egotistical look at all of my favorite posts I wrote throughout the year, which somehow translates to the “Best Posts.” If you enjoy coming to this site, I appreciate it very much! For new visitors and long time friends, New Jersey is still a mess of swamps, toxic waste, and a ton of pop culture garbage, so have no fear, 2009 will not let you down!
Chronicles of Jersey Shore: The Boss, The Boardwalk, & the Batman Poster
Seduced By Barbie
Barbie: This is Why She’s Hot
Super Hero Dance Sequences
The Day I Got to be Batman
Peculiar Food Habits
Reasons Why Sammi Curr is Rock’s Chosen Warrior
Criss Angel Makes His Believe Show Disappear
Changing of the Geek
On Getting Old
New Pepsi Logo
Pumpkin Orgasm
The Watchmen’s Comedian Can Scratch his Sexy Armpit
Notes on an ’80s Scandal
For the Love of Loughlin
The Sexy Armpit’s “We Can Make a Difference” Campaign
Embarrasing iPod songs
Sports Talk and Female Sports Fans
We Apologize for Breeding The Jonas Brothers
Two-Face cameo in Dead Heat
Harrah’s Phone Sex Customer Service Center
Cineplex Odeon Memories: The Night I was a Ghostface Killa
Captain America: Back to Life and in my Kitchen
My Attention Diverted
Did Elisabeth Shue Bankrupt NJ?
Wonder if Wonder Woman Spits or Swallows? Wonder No More…
If Things Never Got Cold
UPS is Wet and Horny all the time!!!
Brought to you by the number #11
The Wonderful Parking Garage of Oz
www.SexyArmpit.com

It’s been almost 25 years since Elisabeth Shue played Ali “give me back my radio” Mills, Danny Larusso’s love interest in The Karate Kid, so it’s about damn time she made some headlines again. This time, instead of playing the girlfriend of an Italian Jersey boy who learned how to wax on and off, she was actually instrumental in New Jersey losing a bunch of cash. For NJ to lose more money than it already has seems impossible.

Gracie, a film about a Jersey girl who wanted to play competitive soccer, did not make enough revenue to turn a profit. Almost 4 years ago, NJ’s Economic Development Authority wrote off a $2 million dollar loan to the film’s producers to pay the tab for Jerseyites Andrew Shue (a co-writer on the film) and his sister Elisabeth to star in Gracie. The loan was granted by state lawmakers in hopes of boosting movie production in New Jersey. The filmmakers also have to pay back the film’s lead financial backers Goldman Sachs, who shelled out $7 million dollars to make the film.

Regardless of NJ being “in the hole,” Elisabeth Shue could probably afford to send me a kickback from her residual check because I keep her entire filmography in rotation. Just the other day I checked my brain at my front door and popped Hollow Man into the antique “DVD player.” Let’s talk about that one scene where Josh Brolin is about to get his bang on with her. We would’ve had a nice fleeting ass cheek shot, but her granny thong is in the way. That was the most ginormous whale tale in the history of the existence of the term “whale tale.”

Even though Shue is no spring chicken, she’s still a hot and seasoned actress who has starred in a bunch of other films close to my heart. You are all beasts for condemning her turn as Jennifer Parker in Back To The Future II and III. Leave her alone, she was in a catch 22 situation! She had to fill the “shues” of Claudia Wells who had a sexy appealing sex appeal. And no…that wasn’t a typo. Wells was not only sexy, but supportive as her character Jennifer rooted Marty on: “You’re good Marty, you’re really good!” I love that kind of encouragement, especially when she’s being “encouraging” in the back of my black Toyota 4×4 down at the lake.