Halloween is here! The season has flown by unusually fast this year. If you’re like me, you’re savoring every last bit of it. To assist with that, The Purple Stuff Podcast is back with a new episode for you. We hope you will check it out as you’re making final tweaks to your costumes, or just hanging with your friends having some Pumpkin beer. Our subject this time around is one that permeates pop culture this time of year: The Universal Monsters!

You’d be hard pressed to find a horror or Halloween fan who doesn’t have at least a small portion of their heart dedicated to one of the classic roster of Universal Monsters. Even if you’ve never seen any of the original films, you likely have an affinity for Dracula, Frankenstein, The Wolfman, Bride of Frankenstein, The Creature, and The Invisible Man. Their likenesses have been with us our whole lives via movies, advertising, toys, and cartoons. Halloween is always better when they’re around in some fashion.

This episode of The Purple Stuff Podcast is dedicated to various incarnations of these characters. Par for the course, you won’t be hearing the typical entries from us. Matt from Dino Drac and I bring up some of our favorite instances of these horror icons that don’t get a lot of attention. It’s a fun one as we discuss breakfast cereal, action figures, and music videos. Hope this helps enhance your Halloween season! It’s not over yet Bay-bay!

As always, thank you for your continued support! We wouldn’t be able to do this without you. Thank you for reading, listening, and watching our exploits. If you would like to support the show, we’re on Patreon! Each month we record a special bonus show for our Patronies there. Other than that, have you watched The Sexy Armpit Halloween Special yet? If not, be sure to check that out after you hear the podcast!

Don’t let this hurricane stress you out. Relax. Have a drink.
“Melancholy Monster” by NJ artist Mike Bell

The media is so lame. They’re like your friend’s parents who always tried to say cool and hip things but they just sounded about 8 months behind the times. If you watch the news and read websites and newspapers you may be buying right into the hysteria. I’m not saying I don’t take weather threats seriously, but do we really need to refer to a killer hurricane as a “Frankenstorm??” That is the dumbest thing ever, way to make a mockery of a storm that has already left 30 people dead in it’s wake. Way to go reporters. You’re spin SUCKS…and Frankenstein rules. By the way, this Hurricane has a first name and it’s Sandy. It just so happens that it’s planning to hit the New York/New Jersey area a day before Halloween. Someone doesn’t want the kids in these areas to have any Halloween fun. Halloween was postponed last year because we had about 5 inches of snow. Did Nostradamus predict any of this shit? The weather needs to stop f*cking with Halloween and the media needs to stop being such morons. If you’re in the NJ/NY area, be safe, be cautious, and don’t panic just because the media is telling you to.

New Jersey metal band Overkill always offer some of the coolest looking rock t-shirts around. The shirt pictured above was printed up specially for their 25th anniversary show which took place minutes away from their where they originally formed, Sayreville’s Starland Ballroom. I love how they incorporated the Garden State Parkway sign into the tee on the front and the state of NJ on the back. Overkill has never been afraid to admit that they hailed from Jersey and that is awesome. Presently, Overkill is working on new songs for an album slated for release in early 2012.

*One of my favorite songs ever and a theme song I used when I worked in radio is Overkill’s Kick-Ass Cover of “Frankenstein.”

On the ride home last night I swear I noticed Dracula on someones lawn. The Frog Brother in me told me that I needed to pull over and check it out. I wouldn’t want any blood sucking house invasions taking place in a nice town like this! When we pulled up to the house I let out a sigh of relief because the vampire wasn’t real, it was all part of a killer Halloween display that the good folks of the house have been putting up every year for the last 9 years!

The display, which takes up their entire lawn, steps, and porch, includes Frankenstein, skeltons escaping from the ground, and glowing window characters. The setup was well done and exceptionally scary! One of the best things about Halloween and Christmas is that you never know what kinds of unbelievable decorations you’ll see when driving around. So many people put forth much effort into their lawn displays and they need to be appreciated!

I’m definitely on board with the whole nostalgia fascination, but I have to say…it’s making me feel so damn old! Digging back into The Sexy Archives has really made me start to think that I need to reserve my space at the senior citizens home. I guess that’s what I get for keeping old stuff.

Here’s my ticket to a special Halloween showing of Abbott and Costello Meet Frankenstein on October 29th, 1998 at the Union County Arts Center in Rahway, NJ.  The Union County Arts Center is the former Rahway Theater which was an old silent movie palace built in 1928 that has been fully restored. The theater is listed on the National and State Registers of Historic Places.

It was free to get in to see the film since it was sponsored by AMC’s Monsterfest House of Horrors.  Every year AMC is known for showing a shitload of great horror movies during the month of October. Earlier today during an exciting fun filled weekend of doing laundry, I was lucky enough to catch AMC’s marathon of Halloween films! When a movie is airing on TV, I’m more inclined to watch than if I have to dig into the vast abyss of my DVD collection to find the specific film. For this year’s lineup you can check out AMC’s Fear Fest schedule.
Abbott and Costello Meet Frankenstein (1948) has always been a favorite film of mine, especially as a kid during Halloween. My father showed me a bunch of the Abbott and Costello films and I always enjoyed their brand of humor. This film was the ultimate meeting of humor and horror. The universal horror icons, Dracula, Frankenstein, and Wolfman (and perhaps another special guest!) were all weaved into the plot in an ingenious way. What makes the film stand out as a classic film, not just a horror film or comedy, was its atmosphere. There were some genuinely spooky parts of the film that always attracted me to watching it, but there were also a slew of really funny moments. The typical Abbott and Costello hijinks are present and the “funny” seems to be intensified since they were both experts at acting scared out of their minds.
From Wikipedia:
– In 2001, the United States Library of Congress deemed this film “culturally, historically, or aesthetically significant” and selected it for preservation in the National Film Registry
– In September 2007, Reader’s Digest selected the movie as one of the top 100 funniest films of all time.
I’m glad I got a chance to see Abbott and Costello meet Frankenstein in a classic movie house. It’s disappointing because there aren’t too many opportunities in the NY/NJ area to get to see classic films on the big screen. It’s a treat to visit The Landmark Loews Jersey Theater when they have film festivals, and it’s rare but Radio City Music Hall has them once in a while as well. I wish there was a theater that was dedicated to showing only horror movies old and new. That’s an idea that would rake in the dough. I know I’d be there at least once a week!

Check out Denizens of Darkness who has a great original piece of artwork inspired by a scene from the film.

I’m always amused when I see people’s reaction the first time they hear a KISS song. Throughout my entire life of being a KISS fan, everyone has always said “Oh I can’t listen to KISS, that’s like death metal.” Many people who have only seen KISS think their sound is more in line with their look. Aside from their typical “Rock and Roll all Nite” fare, take a listen to songs like “Hard Luck Woman,” “I Still Love You,” and “See You In You Dreams,” and you’ll hear that Kiss is the furthest thing from death metal. On the other hand, while they’re not death metal in the least, unlike Kiss, The Misfits sound is more in line with their image.

In 1977, The Misfits came together in Lodi, New Jersey. Named after a Marilyn Monroe film, their ghoulish, macabre makeup was attention grabbing and even more sinister than that of KISS and Alice Cooper. At first listen, their music sounds like simple guttural punk, yet it somehow perfectly evokes the nostalgic and eerie feeling of old horror movies. 30 years after the bands inception, The Misfits are credited as being the innovators of “Horror punk.”

A slew of bands cite The Misfits as one of their influences such as Metallica, and My Chemical Romance. Their skull logo can be seen everywhere, even if the kids wearing it don’t know what it stands for. It’s the MISFITS muthatruckas! Even with the departure of Glenn Danzig and various lineup changes, The Misfits are still terrorizing the country. Check out their tour dates to see when they’ll be in your neighborhood.

– Bassist, vocalist, and former WCW wrestler extraordinaire Jerry Only is known for inventing the “devilock” hairstyle seen here (2nd in from the left): 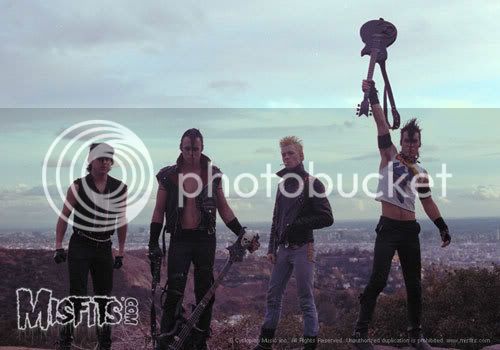 – The Misfits named their legion of fans “Fiends.” Their fiend club is their equivalent of the Kiss Army.

– This bit of interesting info comes courtesy of The Misfits website (www.misfits.com):

“The Misfits and their “Fiend Club” also became instrumental in petitioning for the release of the U.S. Classic Movie Monster Stamp series which, among other of their heroes, featured Bela Lugosi Sr., as Dracula, Ben Chapman as the Creature from the Black Lagoon, and of course, Boris Karloff as Frankenstein.” 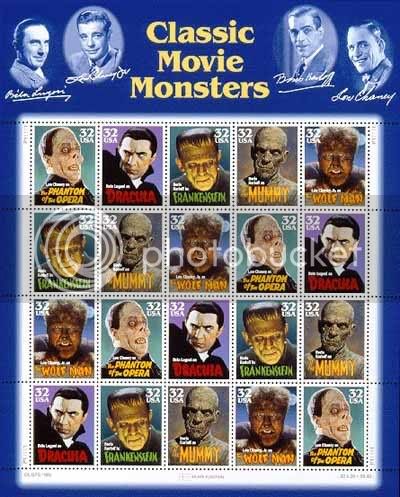 – Here’s probably the most interesting thing I found about the Misfits:
The Misfits operate out of North Jersey where they own a machine shop and a knife factory. Not only do they make their own instruments but also their amps, studded straps and spiked leather jackets! The Misfits also fashion their very own stage sets and props!

– George Romero directed this Misfits video for “Scream” in exchange for letting Romero use 2 of their songs in his film Bruiser.

Video for “American Psycho” with an awesome intro:

Here you can see the craziness of a 1981 Misfits show as they perform one of their signature songs “Halloween”:

Here’s a really cool homemade video for their song “Vampira”: