The Monster Mania Con was calling my name like Vader taunting Luke. The con fell on my birthday weekend so not going wasn’t an option. Cherry Hill NJ is a bit of a hike from Sexy Armpit Headquarters but when I woke up on Saturday morning I noticed the weather was sunny and pretty warm so I decided that a ride down the Turnpike for Monster Mania was the thing to do.

Once I got off at exit 4, I stopped for an iced coffee at D and D to recharge myself and then headed to the Crowne Plaza Hotel. Out of all the stars that were signing autographs over the weekend there weren’t any names that I was hardcore about getting to meet. Of course there were some hotties like Dina Meyer, Allison Barron, and Melinda Clarke, but this time around I was planning on just hanging out and having a good time.

Parking was atrocious as usual, they really need to do something about that. Once the summer installment of MM rolls around I don’t feel like walking 3 1/2 miles back to my car in the sweltering heat. Fortunately, I was able to nab a fairly close spot, but that was after 15 minutes of driving around. Inside I noticed the same scenes of previous MM cons, but that’s what’s cool about it. I thought to myself, “If only there was a place like this that you could go hang all the time, not just a couple of times a year.” 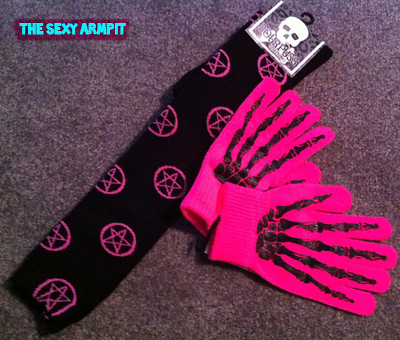 I kept my spending to a minimum and made only a few purchases.
One of them was something cool for Miss Sexy Armpit at the SourPuss Clothing table. 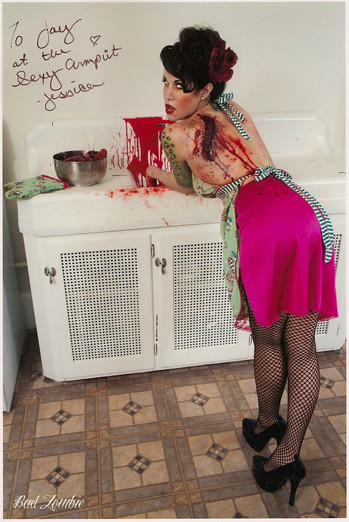 I met a much cooler New Jersey version of Kat Von D, Jessica Rajs. Jess is the creative director from Bad Zombie, the creators of The New Jersey Zombie Walk. They not only organize the Zombie Walk but also sell some rad T-Shirts as well as a Pinup Calendar of some sexy and zombified local ladies. The Gorgeous and Gory Pinup Calendar is sold out, but each print was available for purchase along with other cool swag.

Finally the coolest moments of the con came when I ran into a few familiar faces. First, the question was posed what would happen if The Sexy Armpit was in The Man Cave? Two major players at the MM Con, Geof Capodanno of The Man Cave Blog and his friend and expert cameraman Dan Petrucci do it up in style with a hotel room, and not one igloo, but TWO M*THERF*CKING IGLOOS! What’s so cool about the Igloos you ask? They were filled with…BEER! So they were nice enough to invite a wandering Sexy Armpit up to their room for a brew and they also filmed a Man Cave Interview with me too! It sound so dirty but it really isn’t! It will probably be posted over there pretty soon so be on the lookout! It was a really fun time and I look forward to hanging out with the Man Cave crew again in the future. Thanks guys!

From there I also ran into John and his girlfriend from Freddy in Space (one of the best horror blogs out there) and had a minute to talk with them. And then I talked with none other than the writer and director of the awesome revenge film, JERSEY JUSTICE, John Charles Hunt! If you have a minute, check out The Sexy Armpit’s review of the film right here. By the end of the day I realized that socializing without any stringent agenda made the day way more fun. Without being rushed around and bleeding money out of my wallet I had a chance to really enjoy the experience.

After the con it was time to rush back up the Turnpike for the TNA Wrestling show in Rahway NJ. In addition to “The Shore” spectacle made up of Robbie E., Cookie, and Angelina from Jersey Shore, most of the big TNA stars also appeared including Kurt Angle, AJ Styles, Jeff Hardy, Matt Morgan, and Beer Money. Velvet Sky was signing during intermission so it was my big chance to meet her. Getting a picture with Velvet Sky made me quite a happy man. The show’s fast paced ring action made the crowd electric. It was a great time and we met up with some friends after the show. 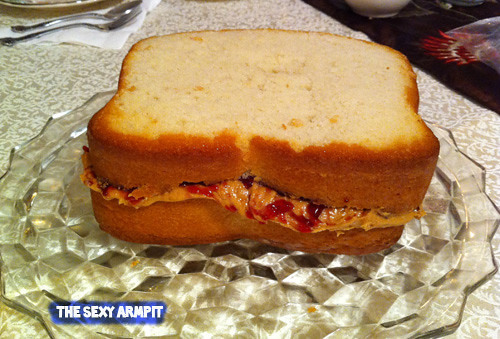 What’s a birthday without a cool cake? Is that a giant peanut butter and jelly sandwich in this picture or a birthday cake masquerading as a giant peanut butter and jelly sandwich? I primed my girlfriend several months in advance that this was the cake I wanted for my birthday and she remembered. So we slapped some candles into that bad boy and dug in. Using the Cakewich Sandwich Style Cake Mold, who is getting a free plug right now, Miss Sexy Armpit took the time to concoct this delicious peanut butter and jelly sandwich cake. I know lots of people who despise peanut butter but obviously I am not one of them. PB and J has always been one of my favorite snacks, whether it’s between bread or on crackers, it’s simple and reminds me of being a kid. Gotta have some milk with it though! This cake was a fun, nostalgic, and a change of pace from your average butter cream birthday cake.

That brings the 2011 Birthday celebration to an end. Thanks for reading and I can only hope it’s just as exciting next year! 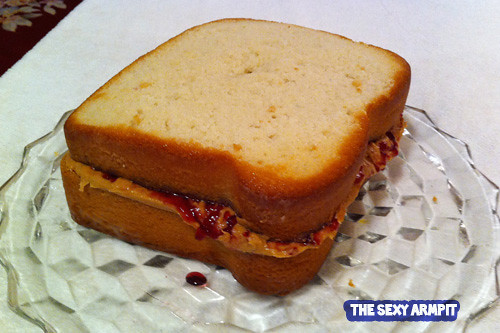 A recent visit to Beauty and the Robeast, one of my favorite blogs, brought to my attention that Ssips drink boxes feature philosophical quotes. I wonder if Ssips got some inspiration from the underside of Snapple caps? I have always found that an interactive, literary beverage is in fact a more refreshing one. What gives Ssips even more pizzazz, is the fact that they are made in New Jersey by Johanna Foods, Inc.! Throughout my youth, Ssips provided my mouth with many wet, fruity, and delicious adventures, and for that I want to repay them by dedicating a post to them here at The Sexy Armpit.
No matter if you brought a paper bag, or a Real Ghostbusters lunchbox, our school lunches back in the day had one common denominator: The drink box. For you sticklers out there, you know this isn’t totally true since the ritzier kids with major coin always had a shiny silver pouch of Capri Sun. But, whatever, fuck those pretentious bastards. Some kids’ parents went through the painstaking work of pouring an actual drink into a thermos! Now that was luxury! Still, even the most top of the line thermos lacked the ability to momentarily enchant your senses quite like Ssips did. The neat little artwork on your Darth Vader or Dukes of Hazzard thermos didn’t change from day to day, but the drink box DID!
In the ’80s, Ssips drink boxes were all white and featured an animated picture of its fruit flavored contents. The box was an indicator of the copious amount of fruit flavors that Ssips brought to the lunch table. You could suck down different flavors every day, or maybe if you felt more intellectual, an Iced Tea perhaps. It was like opening a pack of baseball cards and getting a card that you didn’t have. Whatever flavor you got, Ssips brought the party.
For the majority of us middle class suburban kids, lunch time was a guessing game. “What did my mom/dad put in my lunch today?” was a question we all asked at one time or another. The game grew dull rapidly, and at some point, we stopped paying attention and just mauled the sandwich, side dish (bag of chips), and dessert (Little Debbie snack cake) while fantasizing that we were really inhaling a big juicy burger or a nice big plate of Chicken Parm.
Now that I’m a big kid, the cliffhangers are gone. Leftovers in a Tupperware leave nothing to the imagination. The rather unexciting simplicity of finding a peanut butter and jelly sandwich wrapped in aluminum foil used to actually be a welcome surprise considering there were times when the contents of the foil yielded a slab of liverwurst in between 2 slices of bread. The real whammy came when you discovered what flavor Ssips was in store for you.
We all had our little Ssips rituals, didn’t we? I remember some kids would finish their Ssips, then they’d take the box outside, blow into the straw until the box inflated and then throw it on the ground. Then with a powerful STOMP, the box would make a loud pop that would echo all over school property. Kids do some lame things for entertainment, don’t they? As for my Ssips technique, I’d rip the straw out from its confining cellophane, then unbend the flexible part, and proceed to stab the hole in the box with it. Most of the time it went in on the first try, but other times, it took some really furious pounding to get it in if you know what I mean.
One of my favorite flavors was Grape which was so tangy that it burned my throat going down. It was like the young man’s Johnnie Walker Blue.
www.SexyArmpit.com
I “jacked” this post activity from the highly entertaining Samurai Frog at Electronic Cerebrectomy. To each subject on the list I had to supply an answer that begins with the first letter of my first name. It felt sort of like being on Family Feud except only getting to use answers that have the same first letter. This seems pretty simple but there were a few that stumped me. Give it a shot, it was fun! It’s probably more challenging if you give yourself a time limit. Oh, here’s the catch: No repeats aloud! Jackyl could’ve have killed two birds with one stone: an animal and a rock group! But NO repeats!

I was walking around Wegman’s last night and decided to pick up a few things that caught my eye. I’m always on the lookout for obscure food products and I definitely found some. My first aquisition was Saranac’s Shirley Temple Flavored Soft Drink. With 50 carbs, 50 grams of sugar, and not alot of carbonation, this soda is super sweet and will undoubtedly give you Hyperglycemia. It tastes truly amazingly like a Shirley Temple, and it goes down really smooth. I used to get crap as a kid for ordering Shirley Temples and I never understood why until someone told me that I was supposed to be ordering a Roy Roger. I only knew Roy Roger’s as a western style fast food chain. Who cares if I ordered Shirley Temples wherever there was a bar, they tasted awesome. I even got a little older and started concocting my own at home with grenadine and soda. Now I can have my own pre-made ST in a neat glass bottle and worship at the Temple of Shirley.

Second pickup on my Supermarket Sweep was Wegman’s Peanut Butter and Jelly Ice Cream. It’s awful for you, but it’s smooth and delicious for my tummy. There were other brands that made this ice cream flavor but this was the only one I found locally. Ben and Jerry has this listed in their flavor graveyard. Apparently is was only around for a spell and died sometime in the late ’90s. I guess I’m pretty late on the mark. According to Blue Bell Ice Cream’s website, they make the flavor as well. Either way, the combo of the peanut butter ice cream with swirled grape jelly is awesome and worth trying.