New Jersey’s coastline stretches for nearly 130 miles, but The Garden State is far from tropical. It’s safe to say that any palm tree you see is either of the cheesy fiber optic variety, a blow up pool decoration, or imported from a warmer state. Considering that we constantly get pummeled with blizzards in the winter, the idea of a drink that can make us feel more tropical or exotic here in NJ is welcome. All I have to do to feel tropical is buy a fruity drink from McDonalds? Will the Mango Pineapple Fruit Smoothie automatically transport me to an exotic island? Obviously a mere smoothie won’t whisk you away on a $10,000 dollar getaway to Hawaii, but perhaps Long Beach Island will be in your future? I bet they also recommend the tanning salon for the full effect.
I have to hand it to the McDonald’s marketing team for utilizing the localized ad concept. It’s an effective way to reach groups of people in specific regions. Most of the nationwide McDonalds ads are fairly generic and aren’t very impressive, so these are at least more entertaining. They must be, especially since I felt they were worth a follow up blog post.

The “pumping fists not gas” line has previously appeared on t-shirts and bumper stickers.

A large iced coffee at McDonalds probably would make me want to pump my fists, but not because I want to be mistaken for a guido, more because I would be insanely hopped up on caffeine.

If you read the last installment of Ad Jerseum, you will probably agree that despite whatever controversy exists between New York and New Jersey, The Statue of Liberty is simply not a symbol of New Jersey. People associate Lady Liberty with New York and naturally, the entire United States. I would say more people think of guidos when they hear “New Jersey” mentioned. It’s unfortunate that thanks to MTV’s hard-on for guidos, New Jersey may never overcome that association. Regardless of it being a negative association or not, I’ll admit that the second I saw the words “fist pump” the ad had my attention. I can’t believe fist pumping is as part of New Jersey as plastic surgery is to California. Yay stereotypes!

You can find Roy Rogers cuisine in a few Turnpike rest stops in New Jersey, but a freestanding Roy Rogers? It must be a mirage! No, it’s real. There’s an actual bonafide Roy Rogers near Toms River NJ in a town called Pine Beach, and Ray, a friend of Glenn Walker’s awesome French Fry Diary, sent in a picture to the FFD to prove it.

Out of the 6 Roy Rogers locations in New Jersey, 5 of them are in service plazas. The Pine Beach location isn’t even listed on their official site which means they must be a Rogue Roy Rogers!

Here’s a link to ALL of Glenn’s investigations into the best French Fries in New Jersey
www.SexyArmpit.com

Eating this Russell Stover milk chocolate orange marshmallow pumpkin was a strange moment in my life.

A close friend of mine codename: Ace Johnson recently posted a comment on my MySpace page that said “Jay loves pumpkin orgasms in his mouth.” I can’t deny it. I’m in a marshmallow pumpkin state of mind. This marshmallow happens to have used spray on tan. So what?

Occasionally a certain food or drink does something in your mouth that’s unexpected. Unless you try new food and beverages every day, it’s nearly impossible to be surprised by foods or feel like your presence has been altered by them in some way. A cheeseburger tastes like a cheesburger every time you enjoy one. Each time you eat a burger you know what to expect unless it’s on a different type of roll, has fruit roll-ups on it instead of lettuce, or it’s slathered in some special sauce that you have never tasted. The experience is usually pretty similar to the previous.

If you can say that your mouth has engaged in a sexual experience with a marshmallow pumpkin on more than one occasion, then that’s definitely something you’d want to Twitter.

I’m sure you hear about a lot of new products hitting the shelves. There’s new sodas that have lime infusions, or vanilla flavoring. There’s even new potato chips that taste like baby back ribs, while others have guacamole flavoring. In my time on earth I don’t recall ever hearing about a chocolate covered pumpkin that featured orange flavored marshmallow filling. Someone on LSD must’ve thought this combo up. It makes sense though…a pumpkin is orange, hence the marshmallow inside the choclate pumpkin should taste…ORANGEY! I found my previous interaction with a chocolate marshmallow pumpkin to be quite enjoyable regardless of the fact that the actual pumpkin looked more like a shit dumpling than a pumpkin. Rest assured, Russell Stover has presented a more accurate choco-pumpkin than the non-orange Hershey’s counterpart. They should be proud! 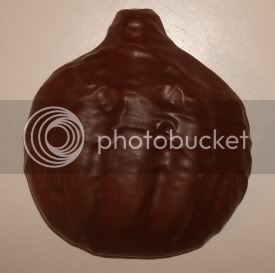 I sliced into the well formed choco-pumpkin with a semi sharp knife, as not to bruise the dainty treat. BEHOLD! Inside lies the most ooey-gooey bright orange marshmallow filling EVER!

It was time to do what I always do when I come in close contact with a chocolate pumpkin that has orange marshmallow filling, why that would be lick it up and down to make sure I can capture the flavor properly…of course!

I follow that up with a circular motion and then I do some fancy moves that Gene Simmons taught me. The pumpkin was so into it. I said to my little orange pumpkin “I know you like that you’re a little nasty choco pumpkin aren’t you? Naturally, it was delighted and begged and pleaded for me to insert itself further into my mouth.

Sinking my teeth into the soft, wet, mushy, orange center was a delight. Having the chocolate crumble into and mash together with the fluffy orangeshmallow while it was being chomped about felt like a flavor mushroom cloud exploding right inside my mouth.

It was a strange moment in my life.

And I didn’t fake it.