Hard to believe that this Halloween season has already come and gone. Time flies is a total understatement in this case. It feels like a few weeks ago when I started hitting stores for Halloween stuff and filming the Halloween Special. Now here we are, it’s almost November. Crazy.

To me, one of the most fun things about Halloween is reminiscing about previous Halloween seasons.  We do that often on the Purple Stuff Podcast, but this time around, this season has demanded a bit of a retrospective.  Me and Matt from DinoDrac will be running through some of our favorite stuff from this Halloween season. At first, the season didn’t seem like it would yield much of a bounty, but it was surprisingly massive.

With so much to discuss, we had to narrow it down so we wouldn’t be recording for 3.5 hours.  Some topics included in this episode are movies, animated plush toys, old Toys R Us sites, and green bun burgers. Check it out wherever you like to listen to podcasts!

Thanks to all of you who are reading this. Much appreciation for the tweets, shares, and comments whether for The Sexy Armpit Halloween Special and The Purple Stuff Podcast. It’s awesome to have you on board and stay tuned for more podcasts and videos really soon! I hope you have a kickass Halloween!

New Jersey’s coastline stretches for nearly 130 miles, but The Garden State is far from tropical. It’s safe to say that any palm tree you see is either of the cheesy fiber optic variety, a blow up pool decoration, or imported from a warmer state. Considering that we constantly get pummeled with blizzards in the winter, the idea of a drink that can make us feel more tropical or exotic here in NJ is welcome. All I have to do to feel tropical is buy a fruity drink from McDonalds? Will the Mango Pineapple Fruit Smoothie automatically transport me to an exotic island? Obviously a mere smoothie won’t whisk you away on a $10,000 dollar getaway to Hawaii, but perhaps Long Beach Island will be in your future? I bet they also recommend the tanning salon for the full effect.
I have to hand it to the McDonald’s marketing team for utilizing the localized ad concept. It’s an effective way to reach groups of people in specific regions. Most of the nationwide McDonalds ads are fairly generic and aren’t very impressive, so these are at least more entertaining. They must be, especially since I felt they were worth a follow up blog post.

The “pumping fists not gas” line has previously appeared on t-shirts and bumper stickers.

A large iced coffee at McDonalds probably would make me want to pump my fists, but not because I want to be mistaken for a guido, more because I would be insanely hopped up on caffeine.

If you read the last installment of Ad Jerseum, you will probably agree that despite whatever controversy exists between New York and New Jersey, The Statue of Liberty is simply not a symbol of New Jersey. People associate Lady Liberty with New York and naturally, the entire United States. I would say more people think of guidos when they hear “New Jersey” mentioned. It’s unfortunate that thanks to MTV’s hard-on for guidos, New Jersey may never overcome that association. Regardless of it being a negative association or not, I’ll admit that the second I saw the words “fist pump” the ad had my attention. I can’t believe fist pumping is as part of New Jersey as plastic surgery is to California. Yay stereotypes!

You can find Roy Rogers cuisine in a few Turnpike rest stops in New Jersey, but a freestanding Roy Rogers? It must be a mirage! No, it’s real. There’s an actual bonafide Roy Rogers near Toms River NJ in a town called Pine Beach, and Ray, a friend of Glenn Walker’s awesome French Fry Diary, sent in a picture to the FFD to prove it.

Out of the 6 Roy Rogers locations in New Jersey, 5 of them are in service plazas. The Pine Beach location isn’t even listed on their official site which means they must be a Rogue Roy Rogers!

Here’s a link to ALL of Glenn’s investigations into the best French Fries in New Jersey
www.SexyArmpit.com 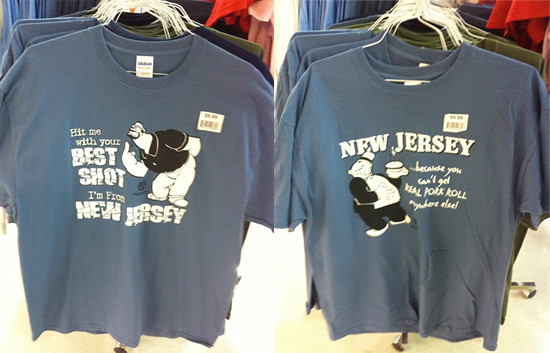 The Columbus Farmers Market features tons of stores that sell fresh produce, antiques, collectibles, toys, housewares, pets, candy, clothes, jewelry and more. All that shopping will probably make you hungry so naturally there’s plenty of places to eat. During your visit you may want to stop and try The Jersey Burger!

As if reality shows and movies aren’t enough, even hamburger joints have jumped on the Jersey bandwagon. Obviously, this burger ain’t nothin’ compared to the monstrous New Jersey Breakfast, but it’s a nice appetizer in comparison. I would opt for American cheese over Swiss when eating pork roll, but that’s just me.

For the best burger coverage check out my friend Tommy Salami’s blog PluckYouToo.com and Brian and Allison’s Burger Blog at EatinBurgers.com.