Good things come to those who wait, right? Obviously, that’s not guaranteed, but judging from what I’ve witnessed, it’s often proven true. Things I’ve only dreamed of as a kid have materialized. I’ve flexed with Hulk Hogan and I live in a world where there’s a Wonder Woman feature film. Life is good. In many respects, it keeps getting better. How’s that, you ask? Read on! END_OF_DOCUMENT_TOKEN_TO_BE_REPLACED 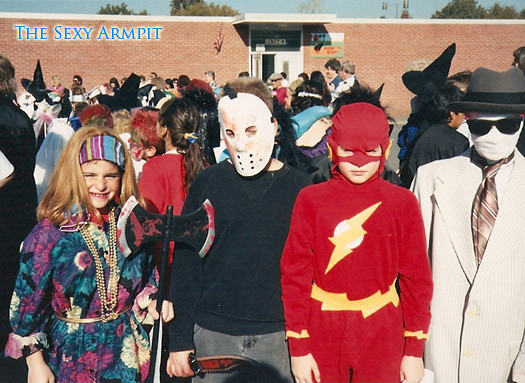 I love to look at photos from Halloween years ago. It’s fun to reminisce about the various costumes my friends and I wore through the years, although sometimes it’s mind boggling. I’m still operating in the mode that 1990 was 10 years ago, but clearly my calculator has proven me wrong. This is a picture of my friends and I in front of our school, oh my Lord…20 years ago! I loved dressing up for Halloween when I was a kid but as I got a little older I started to grow tired of putting so much effort into going home and changing and putting on makeup etc. I phased out of getting dressed up when I stopped going trick or treating. So this photo marks the beginning of my lazy phase for Halloween, a phase that many of us have gone through.

Friday the 13th was one of my favorite horror film franchises and until that point I never dressed up as Jason Voorhees for Halloween so I wanted to see how it felt to live behind the hockey mask for a day. My least favorite film of the series, Jason Takes Manhattan was released a year earlier but it didn’t hinder me from deciding to be J.V. At that time, anyone who dressed as Jason for Halloween was considered to have a “copout” costume. That was the easiest way to go; the lazy man’s Halloween costume. I bought the mask real cheap and I recycled the knife from a Rambo Combat set I had and just slathered some fake blood on it!

My friends in the picture all had outstanding costumes. From left to right you’ll see my life long friend Greg who was way ahead of his time dressed in drag. This guy always had a great sense of humor and to think that he had the balls to dress as a woman when we were kids was awesome. I’m not sure if he would do it now though! I don’t remember too many kids dressed in drag back then. To make things even more bizarre, he was holding a bloody axe making him some sort of deranged cross dressing serial killer.

To the right of me is the absolute greatest homemade Flash costume ever. My best friend Frank kept his costume a secret for a whole month! Then, on Halloween day, after we all came back to school after going home to change for the school parade, he walked into class in full Flash costume and I was literally in awe. The Flash TV series was only a few episodes in and we were both hooked since we were DC comics freaks. The costume had that extra authenticity because there wasn’t even real Flash costumes or cowls available at that time so his mom just went ahead and made it for him herself! Beside The Flash was an awesome Invisible Man costume and underneath those wraps was my friend Steve. Superb costume!

This week Kip Winger Thursday kills two birds with one stone. Kip and NJ all in one.

In 2006, Kip Winger called upon comic book artist Ethan Van Sciver to create the cover art for Winger’s album, IV. The art was also released for sale in poster form.

In an interview on Comics Bulletin, Van Sciver reveals that he was born in Utah but grew up in South Jersey! He also admitted to having some unfavorable jobs in the art field before becoming the prominent comic book artist he is today. He told Comics Bulletin that he “…took a much envied job at the Cherry Hill Mall as a caricaturist. I had to wear a tuxedo, but I was ‘Goth’, so I also wore eye-makeup and a big clunky ankh around my neck, just under my bowtie.”

In addition to his own creation, the Cyberfrog comic book series, Van Sciver has worked on comics for DC and Marvel including Batman, Flash, Green Lantern and X-Men. Recently he’s done work on The Flash Rebirth and Blackest Night series for DC comics.

I’ve admitted so much embarrassing stuff about myself on this blog that relaying my anticipation for the new 90210 rehash wouldn’t make things any worse. Earlier tonight the new 90210 hit the CW airwaves and it would be wrong if I didn’t share my thoughts on the show with you.
Sequels and spin offs have made entertainment their bitch. This 90210 redux could have easily been the CW’s new generic teen drama for the fall season, but with a few tweaks and script changes, presto changeo…we have 90210. Again. Obviously I’m not opposed to seeing the famed characters I grew up watching like Brenda and Kelly return. One might consider them milfs at this point but I’m pretty sure they were just thrown in to grab the old school viewers of the original series. For those who were on board in the ’90s, the show uses a new recording of the same theme song, Kelly has evolved organically into a guidance counselor, and Nat still runs the Peach Pit.

The Wilson’s are a family who have moved from Kansas to Beverly Hills so Dad (played by Silk Stalkings Rob Estes) could take a principal job. Puhlease! If the girls I knew in high school had been in school with a principal who looked like Estes they’d all be mastering the art of getting called into the principals office so they could play the naughty little school girl. It seems unrealistic to me, but this is Beverly Hills we’re dealing with. Rob Estes is married to Lori Loughlin who is a fine woman and I’ll leave it at that, I’ll keep my comments to myself since she’s still ignoring my calls. Loughlin is a bit stiff in this role and I’m hoping she’ll loosen up a little as the season unfolds. Let’s face it, no wife in her right mind would be as calm and collected as Lori Loughlin was after finding out the secret that her husband has a grown child from a previous relationship.

The family lives with Rob Estes’ mom, a former Hollywood actress played by Jessica Walter of Arrested Development. Her role isn’t that much different from that of Lucille Bluth in Arrested Development. As Tabitha, she’s a Long Island Iced Tea lovin‘ grandmother. She loves to tell anecdotes about her days as an actress, specifically one about the time when Ricardo Montalbon cracked an egg on her ass.

Shenae Grimes plays Annie, the main character. She looks exactly how I’d picture the daughter of Estes and Loughlin to look so the casting was brilliant there. Annie isn’t the hottest chick ever so it’s more believable as she stands out from the rest of the girls in Beverly Hills, (you know the old adage that girls from Kansas can’t be as hot as those in California.) Coming from Kansas you’d think Annie’s mom would be just a little bit happy that she has adjusted at Barry Allen speed. But no! Let’s get all up in arms about our daughter meeting a rich guy and having him take her out to an expensive restaurant that happens to be far away in his own JET. That’s every mother’s dream and Loughlin is all angry about it. Come on Lori, stop being Rebecca! I wonder if she’d like it better if Annie wound up dating a creepy rapist?

There’s no badass guys like Steve Sanders or Dylan Mckay, but we do have Ethan the manwhore played by Dustin Milligan. He got head in his car even though he’s got a girlfriend, and he tried to make up for it by giving his girlfriend a limp rose. What an asshole! Milligan reminds me of a young John Travolta mixed with the pothead from Road Trip. And guess who plays his grandmother? Linda Gray, SUE ELLEN FROM DALLAS! Seeing that surprise was possibly the highlight of the entire 2 hour premiere. Anyway, I command you to bring back Ian Ziering or Luke Perry! Absent are the badass guys that I used to look up to like the Dylans of the world. These f’n new guys are all apologizing and emotional and in touch with their feelings! What happened to all the west coast assholes? Grow some balls 90210! We need some danger!

Gushing about this 90210 rehash is not what I’m here to do. I did have a few complaints. First, there were a few moments where the “California talk” was played up a little in the dialogue. These kids just moved from Kansas and you would never know it. They were from Kansas? If there’s a Beverly Hills in Kansas then I’d believe it! Yeah totally…to the max! Also, the show seems to be playing to a younger crowd than it’s predecessor. With shenanigans like copying book reports, not making the lacrosse team, and letting pigs loose onto the football field, I wonder what other kind of wacky Saved By The Bell hijinks will be happening in future episodes? Why not get Screech in on this while we’re at it? Hopefully the drama gets trumped up a little because there’s some stiff competition with shows like Gossip Girl. Might I say that The O.C blows all of these shows out of the water in terms of acting, and dialogue? Yes I might.

Apparently I don’t wish they all could be California girls anymore. It seemed like Brenda was thrown in as an afterthought even though she was pretty much the main character in the original series. In one scene of the premiere, call me crazy, but Brenda appears to have horrible teeth and long sideburns. And blogger extraordinaire Silver played by Jessica Stroup looks ridiculously emaciated. Can we get her an In and Out Burger or something? I thought girls in Southern California were smart enough to know that anorexia isn’t healthy nor cool? I could see it now…on a very special 90210…

Judging by the premiere, 90210 wasn’t so bad and I’m definitely going to give it a few more episodes to work out it’s kinks. But if the sound keeps cutting out on my Comcast HDTV I’m going to freaking blow the set top box up cause they f—ing suck ass. I love paying close to $200 bucks for shitty cable service. I should be swimming in the Wilson’s pool in Beverly Hills, that’s how good my cable service should be for that kind of money!