WWE’s next Pay-Per-View, No Way Out is emanating from the IZOD Center in East Rutherford, NJ on Father’s Day, June 17th 2012. The print ads and TV commercials for the event are done in an old-timey style and feature Daniel Bryan and his now ex-onscreen girlfriend, A.J. It will be a homecoming for A.J who is one of our past Garden State Playmates and hails from Union City, NJ. The poster pictured above is available from the WWE Shop via this link. The matches are listed below – as always, the card is subject to change.
C.M Punk vs. Daniel Bryan vs. Kane in a Triple Threat Match for the WWE Championship
John Cena vs. The Big Show in a Steel Cage
Shaemus vs. Dolph Ziggler for the World Heavyweight Championship
Christian vs. Cody Rhodes for the Intercontinental Championship
Brodus Clay vs. David Otunga (Pre-Show)
www.SexyArmpit.com

by Ro-Beast Rollie via this link at Beauty and the Robeast
While perusing my friend Ro-Beast Rollie’a blog Beauty and the Robeast, I came across something I just had to share with you. As a huge fan of 2008’s The Wrestler, I couldn’t believe my eyes when I saw Rollie’s MS Paint work which transformed The Wrestler into The Thumbwrestler. This is the type of genius stuff that makes my day. If only I could get my hands on a custom WWF LJN style thumb wrestler Mint In Box of Randy “The Ram” Robinson! The Ro-Beast can certainly work some MS Paint magic, but I doubt he can make that one happen! Excellent work Rollie – fresh as monkey’s breath brutha!
www.SexyArmpit.com 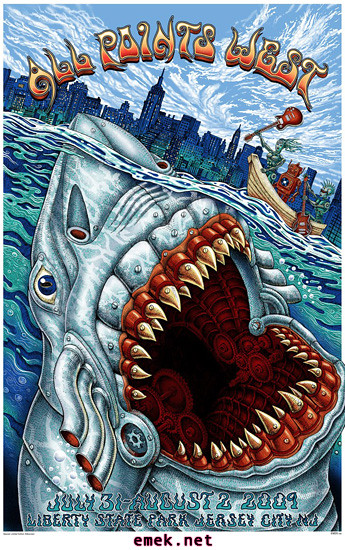 Renowned concert poster artist, Emek, created this poster for The 2009 All Points West Music and Arts Festival at Liberty State Park in Jersey City, NJ, which is basically the equivalent of Coachella for the east coast. The lineup for 2009 included Jay-Z, Coldplay, Tool, The Ting Tings, The Yeah Yeah Yeahs and a host of others. As of now, it doesn’t look like there will be an APW Festival in 2010.

This week Kip Winger Thursday kills two birds with one stone. Kip and NJ all in one.

In 2006, Kip Winger called upon comic book artist Ethan Van Sciver to create the cover art for Winger’s album, IV. The art was also released for sale in poster form.

In an interview on Comics Bulletin, Van Sciver reveals that he was born in Utah but grew up in South Jersey! He also admitted to having some unfavorable jobs in the art field before becoming the prominent comic book artist he is today. He told Comics Bulletin that he “…took a much envied job at the Cherry Hill Mall as a caricaturist. I had to wear a tuxedo, but I was ‘Goth’, so I also wore eye-makeup and a big clunky ankh around my neck, just under my bowtie.”

In addition to his own creation, the Cyberfrog comic book series, Van Sciver has worked on comics for DC and Marvel including Batman, Flash, Green Lantern and X-Men. Recently he’s done work on The Flash Rebirth and Blackest Night series for DC comics. Despite rumors you might have heard around the country, there’s nothing really great about the Jersey Shore. Except for a few sections of extreme wealth, the Jersey shore has always been pretty shitty truth be told. Now don’t all you Jersey Shore Enthusiasts get all upset now, admit it…in the back of your saltwater-logged heads you know I have a point.

One of the main attractions for families to head “down the shore” has always been the boardwalk and the amusements. I’ll cut the crap, you’ve never seen shittier rides. You might as well dangle your kid from the landing of your 3rd floor walk up because that’s about as exciting as it gets. Not to sound like a PSA, but often it does get as dangerous. I’m being overly critical mind you, since I’ve been lucky enough to experience Disneyland, Disney World and all the related parks, Universal Orlando and Hollywood, etc. The list is long and distinguished and I don’t doubt that most of you reading this are able to say the same and then some. Once you’ve been to IMAX movies, mountain climbing, and met Nikki Sixx you’ll have no chance of rousing your spirits at the Jersey Shore. But you can clog your arteries with plenty of funnel cake and sausage sanwhiches, and fried oreos. (When did Satan buy stock in the Jersey Shore?)

Sure go ahead, call me a Jersey Snob. I live here, I work here, so why am I going against the legendary iconic Jersey Shore? Because of how I was berated by Linda the middle aged, overly tan, overly fat, heavy, heavy smoker, who owns a small one bedroom plastic monopoly game sized house in Belmar, with the gigundo gold necklaces, wreaks of tanning oil and sounds like Donald Duck.

So talk to da hand!

ME: Yeah, but does that really matter? I mean you can look at pictures of the Stone Pony on the internet.”

LINDA: Oh no you didn’t you sunavabitch! You think yaw funny don’t yooh? Well you know who ain’t think yaw funny? The Chairmen of the Bawd that’s who. Now what? You wanna say sumthin? I didn’t think so you scumbag, I was in ‘Nam, why do you think I’ve gotta an aircast on my right ankle and I walk with a limp? But that won’t stop me frhum kickin yaw ass ya sunavabitch!

Back to your regularly scheduled program,

put the needle on the record…

…The board walk and rides were nowhere near as cool as the big boardwalk in The Lost Boys, which seemed so grand almost like a carnival type atmosphere. I used to want to visit the city of “Santa Carla” just because I secretly wished we had a setup as cool as theirs. But I doubt I’d be able to stomach all the damn vampires. How great was the comic store Sam (Haim) was browsing at? There’s no comic book stores on our Boardwalk! Just a ton of lame gift shops and the occasional pizza, and ice cream joints. Not even a good haunted house!

What we do have a ton of are the games of chance like the spinning wheel and the water gun/balloon game. Those are the games that you rarely win anything that cool. At the corner there’s always a spinning wheel game that for some reason gives away full cases of candy and snacks. It’s like the folks who run the game just went to Costco to buy there giveaway prizes for the night, and they were so damn lazy to open the cases of candy that they just figured they’d give each winner a full case. I can say that I’ve won way cooler stuff from those same games in Six Flags then I have at the Jersey Shore. Actually the Batman poster pictured above is the only great thing I’ve ever won at the Jersey shore.

Almost 15 years this Batman poster hung in my room. I can’t remember if a family member won it for me or I won it myself, but either way I was thankful to get this poster. It originally came in a wooden frame that I still have housing a collage of photos. There were a ton of Batman posters to choose from at that Boardwalk game, but I zeroed in on this one. I loved the colors of the background and the building. The artwork is well done and I appreciate the fact that Batman is wearing the blue and gray, since everywhere you looked that summer had Batman in his new black costume.