“That’s right Mavis, yeah one of ’ems got Maryland plates and the other ones from New Jersey…10-4.” – Sheriff Tupper, Tales From The Crypt Presents Demon Knight

If not for The Cryptkeeper, the Tales From The Crypt series would never have spawned 3 movie spinoffs. Originally slated for a Halloween ’94 release, I remember waiting until January of 1995 to see the miserable Demon Knight. I sat in a fairly empty theater to watch this on a Friday afternoon, even dozing off a few times.

Since the Tales series had a bunch of memorable episodes, I had high expectations for this film. Call me crazy, but when I first heard that a new Tales from the Crypt movie was coming out back then I thought it was going to be more like an anthology similar to the original Tales from the Crypt film from 1972 Unfortunately it was nothing like that and it was later indicated through several horror magazines that the script wasn’t even originally intended as a Tales From The Crypt movie.

Aside from the Cryptkeeper introducing and capping off the film, the cool cameos by John Laroquette and Dick Miller are worth noting. Other than that, I couldn’t think of a more dull cast. Jada Pinkett bored me to death, but I was happy to see that John Schuck had a pretty large role. You might know Schuck as Herman in a show that I admittedly watched as a kid, The Munsters Today.

Without any hesitation, I’ve always stood by the fact that Demon Knight sucked. I was much more satisfied with the shlockier Bordello of Blood starring Corey Feldman, since it was a more fitting horror comedy.
The Cryptkeeper needs to make a comeback! The Cryptkeeper can easily be created with CGI so he can continue hosting movies and TV shows forever. If the time comes when the voice of the Cryptkeeper, John Kassir, can’t do it anymore I’m sure it can be closely replicated in the same way that the Looney Tunes voices are. COME BACK CRYPTKEEPER…COME BACK…BUT ONLY WITH A GOOD MOVIE!
www.SexyArmpit.com

I delved into The Sexy Armpit News Archives and found a news report from last year that aired on New York’s Fox 5 news. Reporter Cora-Ann Mihalik broke this truly newsworthy (sarcasm) story about Kim Romano a resident of Manville, New Jersey. The anchor at the time, Ernie Anastos, kept f*cking that chicken by introducing the story as “License Plates Personalized with Profanity!?!”

It all started with an anonymous complaint to the NJ DMV. Some idiot was so offended by Kim Romano’s plate that they took the precious time out of their life to send an e-mail complaint to the DMV about how appalling it was. 4 years prior to the story Kim says her BIOCH license plate started out as a joke but the DMV computers processed and approved the name without any problems. Then, at the time of the news report, the NJ DMV was forcing Kim to give the plates back and making her choose a new plate.

Mihalik interviewed a couple of bystanders regarding this crucial news story. First, Michele Tubby, yes that’s actually her name, said “I don’t want my kids seeing it,” while a retired police officer said it’s not offensive because it looks like it says Bocce Ball. Not sure if that was his attempt at humor or if he’s dislexic: BIOCH/BOCHI BALL. I wouldn’t have given this much thought if I saw this plate on a car on the road. I’d probably get a laugh but that would be the extent of it considering it doesn’t look remotely offensive to me.

The report shouldn’t have implied that the word was offensive from the get go. The report would’ve been more effective if they polled the audience asking if people thought it was offensive or not and went into a tirade about how f*cking ridiculous the person was that complained about it. If it does look offensive to some, it’s obvious that Kim is the one who is the brunt of the joke. License plates don’t call other drivers names, they typically describe the driver of the car. Unless it’s this plate which I have already applied for: URNASS. If you can’t figure that one out then you need to go to text messaging school.
For those who are Bioch curious, a Google search will yield the infinite amount of ways to spell “Bioch,” and I must say that they way it’s spelled on the plate is not my first choice. I would spell it BIATCH primarily because there’s an “ahh” sound in there, and many people even get a little crazy and throw the letter Y in for good measure. To me, BIOCH just looks like the abbreviation for BIOGRAPHY CHANNEL.

Not sure why Cora-Ann Mihalik conveniently left out the fact that Manville NJ is primarily known to many people in the state as the home of the establishment formerly known as Frank’s Chicken House now referred to as Delilah’s Den, but now you know. So there you go, BIOCH! 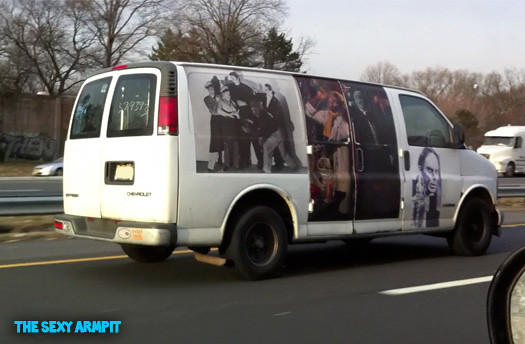 Driving cross country has always been on my list of things to do. A Winnegabo is too much real estate for me to be hauling around, I prefer smaller vehicles. A ’70s style custom van is what I need. How about some black lights and a kickass Sexy Armpit mural on the sides? A man can dream can’t he? Until then I’ll admire other people’s cool vans.

I spotted this “Monster Van” heading down 287 the other day. I’ve seen van artwork before but it’s not often you see one plastered with actual photos of classic monster movies affixed to it on the highway. Whoever owns this van must turn a ton of heads. I HAD to snap a picture with my iPhone (as you can see above) and it actually came out amazingly well considering we were driving close to 60 miles per hour! Right after that, the van sped up and disappeared out of sight. Maybe he was heading back to Transylvania via route 287?

*The van had New Jersey plates but I blurred out the plate number. Also, if you look closely at the back window there’s a Frankenstein window cling!

What do sexual escapades, skinny dipping, smoking pot, and getting murdered all have in common? They are all things that those punk ass teenagers from New Jersey like to take part in, hence, the state was the natural choice for the home of Camp Crystal Lake in the Friday the 13th franchise. Some of the films in the series don’t harp on it’s setting, while others are proud and throw in many references, some blatant, some subtle. Friday the 13th Part 3, was not only presented in 3-D, but it also featured overt references to New Jersey.

Friday the 13 Part 3 is one of my favorite installments of the series along with 1, 2, 4, 6, and Freddy vs. Jason. How could it not be on my list? There’s hot women, a Tommy Chong wannabe, and 3-D yo-yo-ing! And I also can’t forget the villainous biker gang led by Ali, who look like they were ripped out of Michael Jackson’s “Beat It” video. In the scene pictured above, one of the gang members is about to siphon the gas from the kids van. Their van has a New Jersey license plate as well as a Bruce Springsteen “The Boss” bumper sticker. I think it’s cool that the filmmakers paid attention to the details and kept the film set in Jersey no matter how unpopular the state used to be. Nowadays the chances of seeing a film set in Jersey are much greater.

I rarely delete e-mails so I wind up with a traffic jam when I log in to my account. I’m subscribed to so much crap in fear that I’ll miss some awesome deal or coupon code, but that is rarely the case. Wouldn’t want to miss that free shipping promotion or ticket pre-sale, so I never unsubscribe from them. Frequently though, I do receive some helpful e-mails. Occasionally a press release will come my way or an opportunity to get in on a huge monetary transaction courtesy of one Mr. Benson Williams formerly of the Kuwait embassy, a gent who was nice enough to send the e-mail at the ATTN: Dearest One of God. Isn’t he sweet?
Other times I’ll be swarmed with notices that I’m now being followed on Twitter by actual account names like “Ass Fucker.”

The frustrating side effect about not keeping an organized inbox is that it’s easy to lose track of the important, useful e-mails. Several months back an online friend, Bella Bliss, tipped me off to these funky women’s handbags based on license plates. Naturally, other states beside NJ are available, but why the hell would I want to write about those?

You can order all 3 versions of the NJ license plate purse Ebags.com:
The original Littlearth Fender License Plate Purse (now on sale for $112.00)
The “Cyclone” is a bargain at only $48.00!
I don’t know what makes it “The Super Cyclone” model, but here it is.
www.SexyArmpit.com