In honor of METAL DAY, here are a few items from around the Internet that help illustrate New Jersey’s prominence as one of the most METAL states in America. Check these out! m/m/

– I found this classic clip from News 4 New York on YouTube that features interviews with employees and shoppers at Rock n Roll Heaven, a legendary music store in Clark, NJ. Reporter Anna Bond asks the folks in the store about the appeal of heavy metal with the underlying spin of metal being “the devil’s music.” The nightly news hasn’t changed much. Thanks to YouTube user playmobilfriends for posting the video!

– Back in January 2009, the website Metal Injection did an awesome post on The State of METAL music in New Jersey. Some of the most popular metal bands from the Garden State are discussed in the article including The Dillinger Escape Plan, God Forbid, Monster Magnet, Overkill, and they also included The Misfits for their far reaching influence over rock and metal.

www.SexyArmpit.com
http://c.brightcove.com/services/viewer/federated_f9?isVid=1
Check out this awesome article from Brian Donohue that gives us a phenomenal shout out!
http://www.nj.com/ledgerlive/index.ssf/2011/11/gotham_city_new_jersey_yes_bat.html

Although I don’t wear a cape (well…not on a daily basis, but probably bi-monthly), I AM on a crusade so I guess that would make me a sort of occasional caped crusader. If you are a frequent visitor to The Sexy Armpit you already know that my goal is not to rid the Jersey streets of crime and supervillains, but to bring to light New Jersey pop culture.

Previously on the site, I’ve written about my stance that Batman’s Gotham City is actually in New Jersey. After seeing my article and realizing that The Dark Knight rises would be filming in Newark, Brian Donohue, the host and reporter of Star Ledger/NJ.com’s Ledger Live online show, asked me if I’d be interested in being a guest on the show to defend my case.

Brian and his Ledger Live show along with other members of The Star Ledger and NJ.com have put together an incredible barrage of coverage on this awesome pop culture moment in NJ history. I never thought we’d be lucky enough to have the Batman franchise film mere miles away from Sexy Armpit Headquarters! And to think that my best friend Frank and I used to pretend our basements were our batcaves and we fought imaginary villains all over the neighborhood! 20 some odd years later, it’s official! After the Dark Knight Rises in summer 2012, Newark will forever be connected with Batman and Gotham City.

Being on The Ledger Live show was a lot of fun and I was able to take a little tour of The Star Ledger which is a New Jersey media institution. A big thanks to Brian and Bumper from Ledger Live for having me on! I am very appreciative that after 8 years of working on this site that The Sexy Armpit has been recognized as the best NJ Pop Culture blog!

Photos from the filming in Newark courtesy of NJ.com:
http://photos.nj.com/4504/gallery/the_dark_knight_rises_in_newark/index.html 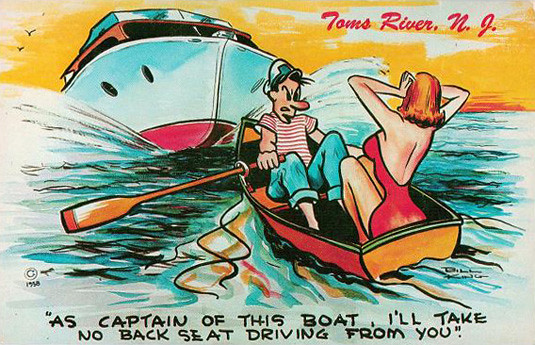 Many towns throughout the Garden State are submerged in water right now. News helicopters have been filming people getting around town by canoe and TV reporters are standing in the middle of streets knee deep in water. This vintage postcard from 1958 is a funny one, but Hurricane Irene was no joke. Can you imagine not having cable for like…an entire day? What about Internet? Worse than that: what about all your snacks in the basement pantry? Soaked! New Jersey is the wet basement capitol of the world right now. In all seriousness, it seems to the rest of the world that we are being little babies about this hurricane. While it wasn’t as severe as some previous hurricanes, it still caused a ton of damage and claimed 35 lives in it’s wake. So far, we know that 4 of them were from New Jersey. The Sexy Armpit sends our sincere condolences out to their families.

Casey Anthony is being released from jail today. Regardless of being found not guilty, Anthony is still a low life for not reporting her child missing for such a long span of time and judging by how she treated her parents on the phone conversations and how she changed her stories constantly, she’s a scumbag in my book.

And because of her, our yearly 4th of July getaway consisted of being holed up in a hotel room glued to the TV. While the summer was officially in full swing my girlfriend and I deferred the typical activities such as fun in the sun and outdoor barbecues in order to be crazy glued to the old school CRT television in the hotel room. Not sure what we would’ve done if they didn’t have HLN network in the room. Previous to the case, I had no idea that Headline News streamlined to “HLN” for the past several years until Miss Sexy Armpit got me hooked on watching coverage of the Casey Anthony trial.

It was easy to get sucked into the case, especially when there’s nothing quite as riveting showing elsewhere on TV except for Regular Show on Cartoon Network. So there was a span of nearly 4 days where the most traveling I did was walk over to the bathroom and in an extreme case, down the hallway to get some ice. The rest of the time was spent sacked out on the bed watching live trial coverage and analysis from the various anchors on HLN.

The only good thing about this despicable bitch is that she actually was bestowed with a fairly bountiful chestal region. And should the media have faulted CNN’s Vinnie Politan for pointing that fact out when he was merely stating the truth? During coverage of the case on 5/31, Casey Anthony was asked to stand up in court. Politan commented “Only thing they’re gonna see now are her boobs sticking out today,” and it became a big controversy as if Politan didn’t know he was on mic. I say big f’n deal! Politan didn’t say anything wrong or offensive, he was commenting on the fact that her defense team is letting her dress like the skank that she is and her goods were on display.

[youtube http://www.youtube.com/watch?v=MhAxw-ZaR88?rel=0]
One of the shows I enjoyed watching the most was HLN’s Special Report hosted by former attorney and journalist Vinnie Politan. I wasn’t surprised when my girlfriend told me he’s from Jersey. I could smell my own, what can I say? Here’s the run down on Politan:

This is not a Halloween related post, but there will be more of that on the way! Right now, it’s New Jersey’s Governor Corzine being interviewed on The Daily Show with the great Jon Stewart! Stewart is one talented m’fer. (I’m sure it didn’t hurt that he grew up in Lawrenceville, N.J!)

This just in from the Sexy Armpit News Desk:

The U.S Treasury is presently in discussions to officially remove George Washington from the dollar bill and replace him with the macabre rocker Alice Cooper. The country nervoulsy anticipates the outcome of such a monumental decision. When contacted for a comment Cooper just started yelling “I want to be elected.” Coming to you live from Washington D.C, I’m Jay Amabile for The Sexy Armpit.com

Here you can sign the petition that will hopefully get Alice Cooper elected president which will hopefully lead to him getting his face on the one dollar bill. Let’s take a look at his resume and see why he’s more qualified than both of our candidates in this presidential election:

As it turns out, much like Wayne and Garth, we’re not worthy! Not only has Alice partied with the Muppets, Jason Voorhees, and Slash but he’s also got himself a mean golf swing. I’m sure he’s trying to forget his moment accompanying Jake “The Snake” Roberts to the ring at Wrestlemania 3 so we won’t make him re-live that one.

Before we get to the videos, I actually caught this Alice Cooper One Dollar Bill at his Brutal Planet concert 9 years ago today. Alice kicked off Fright Fest at Six Flags Great Adventure on October 1st 1999. It wasn’t the only time I saw Alice but seeing his show on a cool, eerie October night in the middle of an amusement park didn’t get much better! I caught the dollar bill and Ryan Roxie’s guitar pick; could the night get any more memorable? Just after that thought ran through my head I saw Alice come over to us (we were in the front) pointing his cane at my then girlfriend as he sang to her “…You’re Poison runnin’ through my veins!” I chuckled to myself as if he knew my pain! Thanks for relating Alice! Now onto the videos!