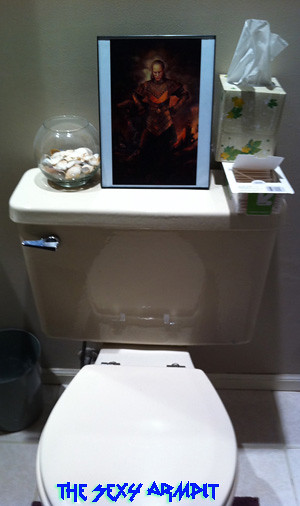 “Only a Carpathian would come back to life now and choose Jay’s bathroom. Tasty pick bonehead!”
– Peter Venkman

I’m going to wager that not too many people have Vigo The Carpathian staring at them while they are pissing. That smug bastard. He’s looking at me every time I take a leak. I try to do my business in the bathroom as quickly as possible knowing that at any moment he could come alive and rip right through the cheap Wal-Mart frame I’ve enclosed him in. Surprisingly, Vigo has tricked some guests who have never seen Ghostbusters 2 into thinking that I have some sort of fine art in my bathroom. It’s better that they think that anyway. Although if you’re ever constipated, sitting there with Vigo the Cruel, Vigo the Torturer, Vigo the Despised, and Vigo the Unholy looking right over your shoulder will scare the shit out of you real quick.

While strolling through the toy aisles at the local Wal-Mart, I came across this Imaginext toy which bared a striking resemblance to a certain cryptid from NJ. I couldn’t decide whether Imaginext’s Fuzzy Dragon was inspired by The Jersey Devil or a reject puppet from Eureeka’s Castle.

The Fisher-Price brand, Imaginext, has done a superb job with their toy line. If I was a kid right now, I’d have their DC Super Heroes, Pirates, and Space toys all on my Christmas wish list. After a full examination of Fuzzy, I snapped some pics with the iPhone and then headed home to continue my investigation. My research lead me to the official Imaginext website where I discovered there was yet another dragon that resembled The Jersey Devil! In fact, they offer an entire line of Dragons!

Sure, Fuzzy and Six-legs can be construed as run of the mill dragons, but with a minor stretch of the imagination, these two dragons can easily qualify as Jersey Devils. Clearly, Fisher-Price did not want to tarnish their awesome toy line with an association to New Jersey.

This gives a whole new meaning to her nickname “Snips”
You may find it hard to believe that I DIDN’T find this headless Ahsoka Tano action figure in the Sleepy Hollow Wal-Mart, or even the one on the planet Shili. What other place besides New Jersey would offer up a sight as savage as a plastic statue of Anakin Skywalker’s decapitated little padawan to impressionable young children wandering wide-eyed through the toy aisles with their parents? How does a parent explain this one?
Well, if you were me, and there’s an enormous chance that you’re not, the majority of you with children will NOT reply in this manner, but those with quick wit and a bit of Star Wars swerve will be prepared to shoot back with a killer automatic response: “Well, if you knew anything about Star Wars you little prick, then perhaps you would know that Darth Sidious slashed her head right off her kneck with one swing of his lightsaber.” Then since you’re still in the Star Wars aisle, just for effect, you could pretend you’re Sidious, grab a toy saber, and proceed to swing at your kids neck, in a playful fashion of course. At the end of this dramatization of such a horrific epitaph, you could cap it all off with, “That’s why you need to do your homework.”
“So if I don’t do my homework Darth Sidious is going to chop my head off with a lightsaber, daddy?” “Yes kiddo, that’s exactly what will happen, or he may have Anakin do it for him depending on how his arthritis is that day.” Once you start convincing them that their grandfather is actually Darth Sidious, I think they’ll get the picture.
With merely a few minutes of consultation with the Bat-Computer, and perhaps some fiddling with the Bat-Hyperspectrographic Analyzer, I was able to deduce that this figure was tampered with. On the lower left corner of the card you’ll see a few marks that indicate the bubble was cut. It looked like a bonafide error while I was in the store, but after walking around the entire store with the figure in my shopping cart, I finally realized that this was no error, this action figure’s head was amputated by a father who was out to set a creative example for his kids. Remember to always use The Legend of The Headless Ahsoka Tano story on your kids folks, it always works.
www.SexyArmpit.com

Many Jersey folks refer to the beach as “the shore,” it’s just something we do. Some people wear socks with sandles, we call the beach “the shore.” Some people still bring fanny packs fastened around their gut that’s hanging over their waaay too small seafoam green bathing trunks, while some middle aged women are parading around in front of other beach goers lacking the proper butt cheek coverage. You can tell when a woman isn’t from around here when she’s wearing what Paul Stanley refers to as “butt floss.”

At the Jersey Shore, some people don’t give a crap if they kick sand in your face as they pass you. And then SOME PEOPLE BRING A MUTHAF–IN’ BATMAN TOWEL THAT THEY BOUGHT AT WALMART. (Me) So, I got news for you lousy people who have no common courtesy and kick sand around while walking: If you see a guy laying on a Batman towel, watch out because you might get a batarang flung at your ass. And nobody wants to see your gut, you beached whale.
Do you think I should soil this awesome rectangular piece of heavenly bat material by bringing it to the dirty Jersey Shore, or should I keep it sheltered in the linen closet at home as it anxiously awaits it’s chance to soak up the water particles off my squeaky clean body after I shower?
Summer is almost here so break out your bootleg of “Surf’s Up, Joker’s Under,” and as the Joker said…”Cowaboonga!”
www.SexyArmpit.com