Sure, horror punk icons are awesome, but they’re even more awesome when they’re from Jersey! It’s insane that so many younger people out there are only familiar with Glenn Danzig because of MTV’s heavy rotation of the video for his track “Mother” in 1993. You should be chained to a wall if you weren’t aware that Danzig is the founder and former lead singer of Lodi, NJ’s legendary Misfits. Presently, Danzig is working on a new album and also runs his own record label called Evilive, and the 18 & over comic book company Verotik.

– In 2002, our favorite fast food freaks from the Jersey Shore paid Danzig the ultimate pop culture tribute when he appeared in the Aqua Teen Hunger Force episode, Cybernetic Ghost of Christmas Past from the Future.

– Yex13’s YouTube channel offers the rare “original” version of Shakira’s “Hips Don’t Lie” video, which features her duet with Glen Danzig. Watch it, especially if you feel like laughing your devilock off.

Here’s a recap of Wrestlemania’s 4 and 5 – the only Wrestlemania events to take place at the same venue back to back: Trump Plaza in Atlantic City. These events showcase 2 of my favorite wrestlers of all time, Hulk Hogan and Randy Savage. Even if you despise wrestling, give it a scan just for some Jersey nostalgia, and to check out Trump’s hairstyle that had it’s own VIP seat in the audience. With Wrestlemania 25 coming April 5th, the countdown is on!

Twisted Sister decked the halls of the Nokia Theater in Times Square REALLY HARD on December 5th, 2008 for their Christmas show and The Sexy Armpit was in attendance! If you’d like a visual aid, check out the video montage I edited up for you at the bottom of this post!

I was impressed with opening acts ZO2 and The Dirty Pearls, both from Brooklyn. I’ve seen ZO2 live before, and their afroed frontman Paulie Z has a dynamic voice and a likeable personality. Bassist David Z and Drummer Joey Cassata are abundantly talented and make the tunes sound rockin’, even though they’ve got a run of the mill ’70s retro rock vibe. Regardless, I found myself wanting to come home and download “Isolate” and “Ain’t it Beautiful.” Their TV show Z-Rock airs on the Independent Film Channel, and it’s also available on iTunes. 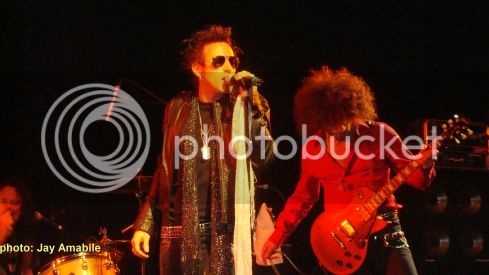 I’ve heard songs from The Dirty Pearls before but last night was the first time I saw them live. They’ve got plenty of hard rock swagger and sleaze but thankfully they don’t chince out on the great chorus’ and hooks. What’s with all the afros in rock music? Both of the aforementioned openers have bandmembers with afros. Didn’t we get the memo? The afro thing was over a few years ago!

Hearing that Twisted Sister is playing Christmas music might seem cheesy to elitist music snobs, but they pull it off with cool to spare. You’d be surprised at how unbelievable Dee Snider’s voice sounds, it might be as strong as it was 20 years ago. I couldn’t make it to last year’s Twisted Christmas show, but I’m glad I was at this one because the entire band chewed up the Nokia Theatre and ate it for a midnight snack. Twisted consists of all original members (Dee, J.J, Mark, A.J, and Eddie) who effortlessly shred, hit, and berate their instruments yielding primal musical results. The band slashed through all their classic crushing tracks as well as the holiday fare from A Twisted Christmas, released in the fall of ’06.
The Twisted Christmas extravaganza became nothing short of holiday TV variety show! Mini Kiss ushered Santa Snider’s sleigh onto the stage. And still looking sexy, Lita Ford strutted onstage in a skintight red hot vinyl body suit to sing “I’ll Be Home for Christmas,” with Dee. Another surprise was TNA Wrestling star, Mick Foley, who graced us by his presence disguised as Santa Claus offering to give the band members anything they wanted for Christmas. Naturally, Dee answered: “I WANNA ROCK!”
At the show, Dee announced that Twisted will release an album of all new material in ’09! And now onto my video montage of the show:
www.SexyArmpit.com

Harry Potter has been a phenomenon with young kids and adults for years now, but does that mean people have been going to their local hair salon and asking for “The Potter?” Kid and Play and Vanilla Ice have had influence on trendy hairstyles but neither of them had the type of impact to make a guy do THIS:

Aside from Beatlemania, I doubt anything will ever be bigger than Batmania. I’m glad I was around for it. Sure, we’re all eagerly anticipating The Dark Knight’s release but the feeling is nowhere near the feeling that came over the world in 1989 when Batman starring Michael Keaton and Jack Nicholson was released. It could have been that it was almost 20 years at that point since Batman was blasting onto the small screen. The Batman TV show was cancelled in 1968 and Tim Burton’s version didn’t hit theaters until 1989. It’s almost legendary how bad producers in Hollywood wanted to get a Batman movie going after the success of the Superman saga.

Like Tom Petty once said, “…the waiting is the hardest part” and I guess finally getting what we were waiting for made us do some pretty outrageous things like shaving bat symbols into our heads. It’s possible I might get reprimanded at my job if I pulled a stunt like this, so in honor of The Dark Knight’s release I’ll continue to obsessively write Batman related entries until the films release. Pictured above is a clip I scanned from my collection. It was printed in a local newspaper in ’89. If you haven’t checked it out yet, here’s the Top 10 Mullets in Marvel History! I only wish someone compiled a list for the WORST HAIRCUTS in the DC Universe, naturally, Magpie would be at the TOP of the list! I’m pretty sure she used a flowbee to get that one of a kind look.