The incomparable artist Tom Krohne aka @Monsterfink recently tweeted about how awesome the ShirtPunch.com site is. Until reading his tweet I had never heard of it so I typed it in and what I found was not just a typical ironic t-shirt store.

Shirt Punch offers a new t-shirt every day and once each shirt is sold out…they’re gone FOREVER! That’s a cool concept since it makes the shirts more rare and original rather than having the chance that every other person has the same t-shirt. Artists can sign up and submit their art and also make a commission off the sale. In today’s case, New Jersey artist and graphic designer Steve Gelenter of CoDdesigns came up with one of the coolest t-shirt designs ever in our NJ T-shirt column.

His Boardwalk Empire parody incorporates the Monopoly connection to Atlantic City. The Rich Uncle Pennybags is modeled after Nucky Thompson while underneath the graphic there’s a quote that reads “When the bankers weren’t looking the outlaws became kings!”

Steve changed the name of some of the properties including Atlantic City Boardwalk in place of simply Boardwalk, Capone’s Place instead of Park Place, Chalky’s Tax (named after Chalky White) instead of Luxury Tax, and it’s all accented by the crime scene outline of a dead body. Unfortunately his design sold out in no time so all we can do now is beg for him to sell it elsewhere!

This is a beautifully crafted Monopoly cake by Hannah Gibbons that I found at The Retroist. Monopoly is one of the most famous board games of all time and many of the street names on the board are actually in Atlantic City, NJ. (Anyone want to buy Baltic Ave.?)

“When Monopoly was devised in the 1930’s, Atlantic City was chosen because it epitomized the kind of glittering tourist destination that many Depression-era Americans could only fantasize about visiting.”

Monopoly is said to be the most played board game in the world. I’m sure there are still at least a few folks out there who have no idea that many of the streets and a couple of the railroad lines on the classic Monopoly board were named after ones that actually existed in Atlantic City during the time the game was conceived in the 1930’s. Many of the streets are still there, so the next time you go to A.C and you blow all your cash, you can then take your own Monopoly driving tour for FREE! Just a word to the wise – don’t pull a Clark Griswold and ask a random stranger to give you directions back onto the Expressway. That’s a bad move.

In honor of the new Monopoly header that I made, here’s a clip of a game of Strip Monopoly – the version not endorsed by Hasbro. Monopoly does tend to get a little boring after you’ve been playing for 3 1/2 hours and no one has gone bankrupt yet, so why not spice it up a bit? Maybe getting stuck in this jail won’t be so bad! Remember to wear a thimble though! 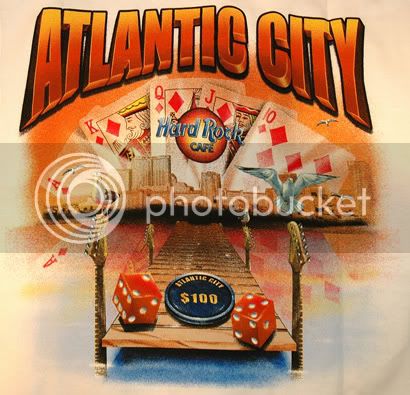 The nation’s second most popular gambling city has a plan to eliminate their competition. Surrounding areas such as Pennsylvania, Connecticut, and New York have attempted to give Atlantic City a run for its money. But just like Dr. Janosz Poha said about the impervious Vigo the Carpathian, these other second rate gambling establishments “are like the buzzing of flies to him.” Taking its cue from swank hotels like The Borgata, The Hard Rock plans to create one hell of an upscale experience to sucker people back to the city that Monopoly took its street names from. The $300 million dollar project will include a boutique hotel and casino similar to their Las Vegas location. Translation: another reason for your girlfriend to try and entice you to hop on the GSP to voluntarily insert wads of hard earned cash into those noisy mind control machines. Until their new complex is built, you can head over to the existing Hard Rock Cafe in Atlantic City which is located at The Trump Taj Mahal and features a Gibson guitar shaped bar. If you’ve never been there, grab some lunch before a concert. The Hickory Smoked Pulled Pork Sandwich is recommended.

Today’s tee beats the hell out of the typical Hard Rock Cafe logo tees that you see everywhere. This shirt is colorful, elaborate, and captures both the gambling aspect of A.C as well as the skyline and elements of the shore where the restaurant is located. Ebay seller benk_store has this shirt up for sale.

Recently, Mrs. Sexy Armpit came across quite a unique item while on a routine shopping spree at Target. I was amazed that she found these “Classic Hasbro Games Game Night Candy,” considering I was just thinking how we could really use some candy in the shape of board game pieces for our candy dishes that coincidentally are in the shape of board game pieces as well. Needless to say, it was a brilliant find on her part.

I realize that most of the children consuming this candy won’t be critiquing the companies choice in naming their product, but damn, couldn’t they have shortened the name? How about just Board Game Candy? It’s obvious that the mini cardboard boxes made to look like board games, which are clearly visible through the CLEAR cellophane wrapper, didn’t make their point abundantly clear so they deemed it necessary to have an inordinately descriptive name. Let’s just say they definitely overcompensated on the name to make up for the products shortcomings.

Inside these mini versions of Clue, Monopoly, Life, and Operation, are tiny Pez-like candies in the shape of board game pieces. Comparing this candy to Pez is way too kind, it’s more accurate to say these candies can be used as soap for you action figure’s bathtub. They very badly want to be a Sweet Tart, but the novelty aspect is far superior than the low grade candy itself. As far as this candy being a good choice to snack on during board game night, that’s a definitive NO. If you’re at the store, you’re better off buying a gigantic 34 lb bag of Skittles and hightail it out of there.

I got a little weirded out when I opened the Operation box. The last time I played Operation was nearly 10 years ago during an all night nostalgic board game frenzy. All I know is that there were bones involved, as well as a few other foreign objects, but there was NO frogs or birds that I had to fetch out of the dude’s body. I always felt bad for that creepy guy we’ve been operating on. All us kids have been poking into his body for years and years. If I were him, I’m pretty sure I would have gotten fed up by this point and said “This isn’t what I signed up for,” while my boss at Hasbro replies “actually, this is exactly what you signed up for, I have your 2- stipulation contract right here, 1) eternally nude 2) constantly probed, tweezed, and judged…so you lose!”

As you can see here, the Operation candy included
blue birds and only 2 green frogs, but no bones anywhere!

The Operation Game History at Hasbro.com offered some insight. Unbeknownst to me, Operation was updated in 2008 to add “funatomy” parts. This means nothing to me. Changing anything about a classic game like Operation is like changing the formula to our beloved breakfast cereals. When are these companies going to learn not to f-ck with Trix, Fruit Loops, Fruity Pebbles, and they sure as hell shouldn’t mess with our board games. I can handle the breadbox, butterflies, and whatever other silly objects are in the original game, but birds and frogs? That’s exactly what our youth needs, a game informing them that when people get older and need Operations, all they have to do is remove the birds and frogs that are fluttering and leaping around in the persons body.