For a while Miss Sexy Armpit and I thought that we’d have to go back to Vegas to play the new KISS slot machines, but this weekend we were proven wrong! It was a big surprise to see them at Harrah’s resort which was awesome.
Visually the machines look badass. The game play itself isn’t anything out of the ordinary, but naturally, it’s KISS-ified. There are a few different bonus games, but after playing 2 different machines, none of them popped up! BOO! One of the neighboring machines had a few bonuses so we were able to check them out. They were pretty cool and showed some concert footage and had you choose from various album covers to unlock more credits or another bonus game. The game plays a few KISS songs. The ones we heard included “Detroit Rock City,” and “I Was Made For Loving You.”
I’m happy that KISS is finally represented in Atlantic City. So far we’ve got Batman, Ghostbusters, The Phantom, Playboy, and now KISS. Not too many more left – I’m pretty happy with the selection!
www.SexyArmpit.com
[youtube http://www.youtube.com/watch?v=uTH5BU-PUbQ?rel=0]
Video I shot of “Rill Rill” – skip to 1:59. Where Did Alexis Go?
‘Twas the night of May 12th and all through the House of Blues, not a creature was stirring until their tickets were scanned. And Miss Sexy Armpit gambling at Showboat and I in the chilly venue without a coat waiting for Sleigh Bells to take the stage. 2 opening bands failed to impress me. The first berated us with chaotic screams and the other made me doze off, both of their names escape me. Fortunately, I wouldn’t have to wait much longer to hear the ringing of the Bells.

Finally at almost 11 O’Clock there arose such a clatter, I sprang from my seat to see the spectacle on stage. The colored lights cut through the fog and beamed on the breast of a retro raven haired siren. With her kinetic energy and ability to arouse, I knew in a minute it must be Alexis Krauss. When what to my wondering eyes should appear but a wall of Marshall amps and 2 blazing guitarists, Derek and Jason.

Every song dropped a barrage of beats provided by a DJ on the side of the stage. The songs pumped into me like bullets. Sleigh Bells blasted into tracks from both of their albums Treats, and Reign of Terror, including the head bopping “Kids,” their latest track, “Comeback Kid,” “Tell ‘Em,” “Treats” “Infinity Guitars,” “Rill Rill,” and “Riot Rhythm.”

The band amped the crowd up with these supercharged songs. During “Rill Rill,” after basically falling off the stage trying to get down from it, Krauss dove onto the raised hands of the audience as they floated her around for a bit. After their last song, Krauss got back on the mic and thanked everyone and also threw in a little tongue in cheek tidbit about herself for those of us keeping track, “This is the first first stage I ever fell off…” I say make the t-shirt! I WAS THERE WHEN ALEXIS KRAUSS FELL OFF THE F’N STAGE AT H.O.B ATLANTIC CITY!

Sleigh Bells LIVE sounds even better than on an iPod. It’s hard to capture their juxtaposition of madness and etherealness merely via earbuds. Sometimes bands’ live performances are disappointing when you go into a show expecting to hear the songs the way you know them from their studio album, but Sleigh Bells replicates their songs flawlessly. Krauss’ dancing, the barrage of lights, and all the guitar shredding only served to enhance the songs and create a totally exhilarating experience.

If you can only wrap you’re head around music from the contestants of American Idol, then Sleigh Bells may not be for you. The band skillfully mixes pure modern pop hooks with an enormous rock sound and an electro hip-hop cheerleader vibe. You get all that?

Do you remember hearing Guns ‘n’ Roses, The Beastie Boys and Nirvana for the first time? All very different bands, but they were huge game changers. They made you take notice, they made you want to listen to the same album over and over and over again. Sleigh Bells has become the most recent band to make me want to listen to their tracks on loop. Their musical approach is fresh and surprising. Their two albums are constructed with a zigzag of minimalism, melody, and riffs, all layered with lush harmonies throughout.

After their show at House of Blues in Atlantic City, seeing Sleigh Bells LIVE again is a must, but I’ll have to wait until to they come back to New Jersey! Chances are, they will be back again sometime soon since Krauss is a Jersey girl and a future Garden State Playmate, no doubt!

Before the traditional ending, let me say that House of Blues A.C is one of the coolest venues to see a show in Atlantic City. It’s right on the boardwalk and has a real rock and roll vibe where Sleigh Bells knocked me out with their brilliant high powered stage show. They are on tour now so I recommend checking them out next time they come to your area, and until then…to all a good night!

The Grinch is a mean one…and a FIEND!!!

It’s never been depicted on a map and Santa Claus isn’t even aware of it, but right beside the Island of Misfit Toys lies the Island of Fiends. Everyone who resides there is covered in ghoulish fiend makeup and Misfits songs are piped through speakers all over the island. During Christmas you might see a lot of people wearing these holiday themed Misfits t-shirts. The first one features a fiendish creature who bares a resemblance to The Grinch and is rocking a skeleton jacket and gloves. We know The Grinch is a humbug, but who knew he was such a punk?

The Misfits Santa T-Shirt
What do you think this scary Santa will leave for you under your tree? Maybe The Misfits latest album The Devil’s Rain? I’d like to have The Misfits record a cover of “The Most Wonderful Day of the Year” from the scene on the Island of Misfit Toys in Rudolph The Red-Nosed Reindeer specifically for me!
www.SexyArmpit.com

http://steelpantherrocks.com
Steel Panther are the Viagra addicted, horny hair metal sons of Spinal Tap. The band has been on a tear since 2003’s Hole Patrol, and 2009’s Feel The Steel. Just a  few weeks ago Steel Panther released their latest album BALLS OUT available through iTunes, Amazon or wherever you BUY music. Don’t illegally download this album because these m’fers need the money. Especially Stix cause he’s obviously been in therapy ever since missing out on the chance of drumming for Bon Jovi. Read all about the Jersey drummer in his bio pictured above that appeared in  Feel The Steel‘s CD booklet.
SEE STEEL PANTHER ON DECEMBER 1st at STARLAND BALLROOM!
www.SexyArmpit.com
[youtube http://www.youtube.com/watch?v=2dRQklumuRI?rel=0]
Lipstick and Cigarettes Premiered The Sexy Armpit Theme Song LIVE on 11/4!

If asking a band to write a theme song for you sounds like an egotistical stunt, it probably is. But in the case of The Sexy Armpit, we needed an original theme for the intro of our upcoming YouTube show.  I had a very specific sound in mind and when I approached one of our favorite NJ bands, Lipstick and Cigarettes, during one of their rehearsals (wearing a ski mask and a gun in hand), first they were alarmed, but they grew very receptive to my scheme.

Lipstick and Cigarettes played a show at Frankensound Studios in North Brunswick on Friday night November 4th and they mentioned that they would have a little surprise in store for us. As a little preview to the final recording, L and C premiered The Sexy Armpit Theme Song LIVE! Check out the video above! 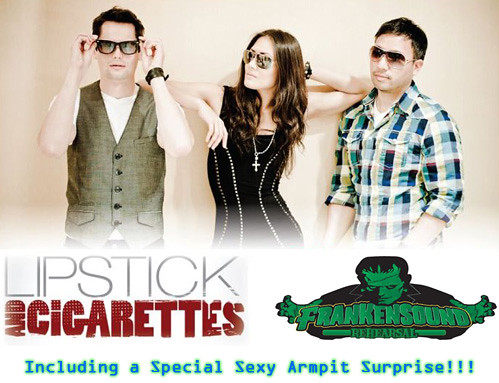 No plans tonight? C’mon, it’s Friday! My typical Friday night usually involves eating pizza and passing out on the couch, but tonight will be different. Sexy Armpit favorites Lipstick and Cigarettes are performing at Frankensound Studios in North Brunswick tonight. There’s a rumor that the band has a special surprise for The Sexy Armpit! I wonder what it could be? Be there tonight to find out!

Many readers of The Sexy Armpit who don’t know me in real life think I’m always bashing Bon Jovi…and I am. The thing is, I’m a huge Bon Jovi fan at the same time. You see, Bon Jovi is not the same band as they were when I was growing up. The cool rock stars from a few miles down the road who lived and breathed rock and roll are long gone. I guess sitting on billions of dollars sucked all the coolness and rock and roll out of them too. The guys hungry for stardom who worked with famed songwriter Desmond Child in Richie Sambora’s basement once upon a time creating what would become one of the most iconic rock albums of all time have taken a wrong turn on the road to rock.

I want none of this “Who Says You Can’t Go Home” crap or this “(You Want to) Make a Memory” bullshit. The modern Bon Jovi completely ignores the hard edged pop rock they once produced because they believe it isn’t lucrative anymore. Let’s be honest – I think Bon Jovi would become even more popular than they ever were if they released a really kickass hard rock song with a catchy chorus like they used to do back in the ’80s. People worship those songs. Do you really think people hanging out in bars 20 years from now are going to be sliding dollar bills into a space age jukebox to hear “When We Were Beautiful?” F-ck no. They want to hear the good stuff!
It’s simple, if you want to relive some of Bon Jovi’s greatest musical achievements then go into your iTunes and listen to their 1986 album Slippery When Wet in it’s entirety. It’s one of the greatest rock albums of all time and it’s sold 28 million copies worldwide. Even if you’re not a Bon Jovi fan, respect must be given to this album for it’s prominence in pop culture. Go to a wedding, a beach bar, a barbecue, or sporting event and chances are you will hear a song from Slippery When Wet. You know them whether you like to admit it or not, here we go: “Wanted Dead or Alive,” “You Give Love a Bad Name,” “Never Say Goodbye,” and of course the song that’s almost as popular with drunk women as Journey’s “Don’t Stop Believin'” – “Livin’ On a Prayer.” Oh and I can’t forget one of my personal favorites, a song I share fondness for with Barf from Spaceballs, “Raise Your Hands.”

And now, easily one of Bon Jovi’s greatest tracks:

Lipstick and Cigarettes performed last Friday night at The Saint in Asbury Park and The Sexy Armpit was in attendance. L&C are quickly becoming a fixture to the NJ pop rock scene which is awesome. The band’s music (which is available on iTunes and elswhere) is a modern take on the ’80s new wave pop rock style. Their hard work is paying off since they’ve been in rotation at local college radio stations and they’re playing some great gigs in the coming months. I recorded their cover of Duran Duran’s “Rio” which was chosen by the winner of their T-Shirt contest they held at their Facebook page. You can see them live at The Court Tavern in New Brunswick on Saturday, April 16th.

Their first official T-shirt is now available at ALL Lipstick and Cigarettes shows!